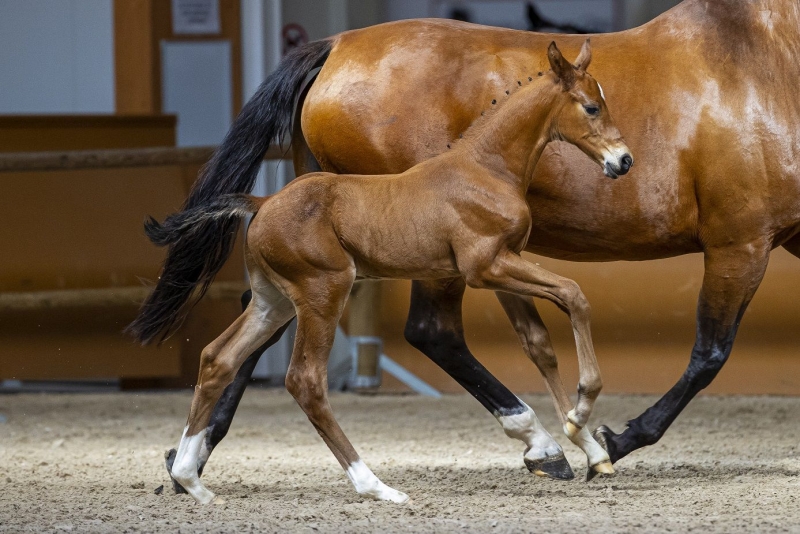 Foals bred out of Grand Prix mares, dams of approved stallions and prominent damlines. The 20th collection of the Limburg Foal Auction is one that riders, owners and breeders will be very excited about. On Wednesday the 29th of September this promising collection will be auctioned live at the Peelbergen Equestrian Center (NL) and online bidding is also possible.

Over the past twenty years, the Limburg Foal Auction has built up an excellent reputation and this has resulted in a long list of top references, such as Ben Maher’s Grand Prix winner Ginger-Blue, the European Championship horse Ermindo W of Rolf-Göran Bengtsson and Marco Kutscher’s previous outlier Van Gogh. This year the selection committee has once again been able to select a striking collection. Most of the foals are coming from the strong breeding area around Limburg. The committee has succeeded in selecting a high-quality collection, with first-class performance genes.

Two auctions
Two days after the live auction at Peelbergen Equestrian Centre, an online edition of the Limburg Foal Auction will take place. Thirty foals will be sold in this online auction and top progenitors like Emerald van ‘t Ruytershof, Chacoon Blue, Cornet du Lys and Bustique are represented in this promising collection. From Thursday the 30th of September bids can be made for the foals in this online auction, which closes on Friday the 1st of October from 7.30 pm. Four foals were bred from half-sisters of international 1.60m level showjumpers and the direct damlines of very successful horses like Havinia (Gianni Govoni), Glamour Girl (Henrik von Eckermann), Van Gogh (Marco Kutscher), Calvados Z (Christian Ahlmann) and Voltaire 89 (Marc Houtzager) are represented in this collection.

Collections online
All information about the foals and auctions can be found on www.limburgseveulenveiling.nl. The live auction on the 29th of September starts with the presentation at 1.30 pm, the auction starts at 4.00 pm. Online bidding for this auction is possible after registering on the website. The Limburg Foal Auction will be live broadcasted by ClipMyHorse.