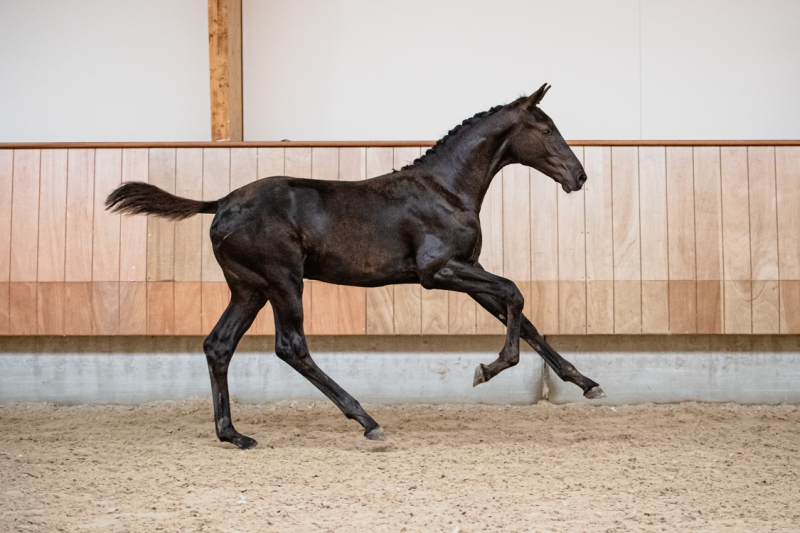 Dressage foals sired by World Champions Kjento and Glamourdale, Pavo Cup champion Las Vegas and Olympic team medalist Everdale are part of the seventh collection of the KWPN Online Foal Auction. Top progenitors such as Eldorado van de Zeshoek, Douglas and Gaillard de la Pomme are well-represented with promising showjumping bred foals. Bids can be made for this collection from Friday the 8th until Monday the 11th of October.

The collection of this second-to-last foal auction offers 15 dressage and 18 showjumping bred foals. During the photo and video days, all foals were assessed by the KWPN inspector and a veterinarian. This means that all the foals are selected on health and correctness, which makes sure they have a promising future.

Proven origins
A lot of dressage foals are related to successful sport horses. The filly Ratina (s.Mister Diamond) comes from the same dam as the international Small Tour horse In Design (s.Don Olymbrio) and her granddam produced the international Grand Prix horse Cerano-Gold (s.Serano Gold) ridden by Nathalie Wahlund. Ragnar S, who is sired by World Champion Kjento, was bred out of a half-sister of the KWPN approved Small Tour stallion Ro-Lex (s.Montecristo), while the sire of Read All About It SSS won the World Champion title as a seven-year-old. This Glamourdale son also carries valuable dressage genes on the dam’s side, as he was bred out of a half-sister of the international Grand Prix dressage horse Thunderhall (s.Donnerhall) ridden by Rhett Bird. Pavo Cup champion Las Vegas is the sire of Raf G, who was bred out of a young half-sister of the KWPN approved Big Tour dressage stallion Ghandi (s.Bojengel).

Performance genes
Top progenitor Eldorado van de Zeshoek plays a prominent role in international top competitions and foals from his sons Highway M TN and Grandorado TN are also part of this seventh auction collection. The Connect son Roswell comes from a dam who has already produced several international showjumpers and has the same granddam as Keean White’s Grand Prix showjumper For Freedom Z (s.For Pleasure). The Pegase van ‘t Ruytershof son Ricardo van den Hoogeweg is another foal which comes from a good family, as he is related to international 1.55/1.60m horses such as Cartouch and Elliot. The filly Ryana combines the Grand Prix stallion Carrera VDL with the family of Grand Prix show jumpers such as Maserati and the Olympic Orestus (s.Indoctro).

More information
The collection can now be found at www.kwpn.auction. After registering on our website, biddings are possible from Friday the 8th of October until Monday the 11th of October. On the last day, the biddings will close from 8PM CET. We are happy to provide you with more information about the collection. In addition, our sponsor Horses2Fly, can take care of the transport of your foal. For any questions you can contact the KWPN inspector Wim Versteeg on +31(0)6 54 20 18 00 or Rianka Hazeleger via salespromotion@kwpn.nl or +31(0)341-255 511.