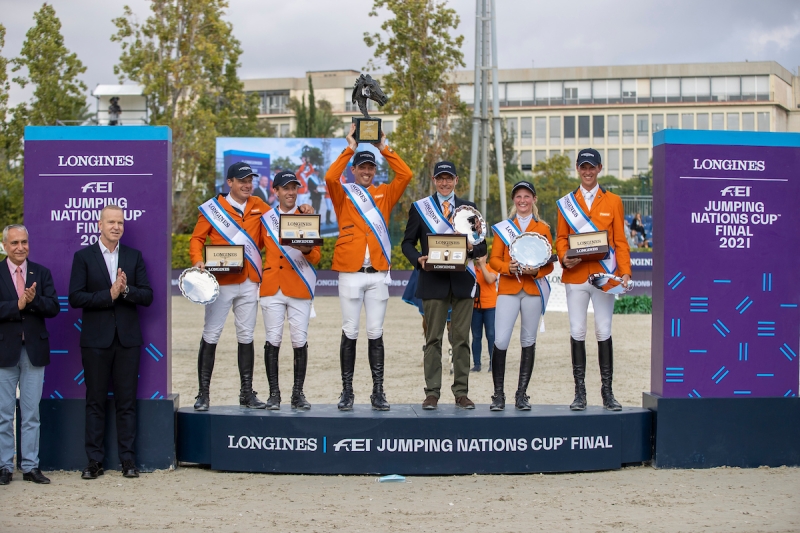 The showjumpers of TeamNL closed the outdoor season with an impressive victory in the Longines FEI Jumping Nations Cup Finale in Barcelona. This means that the prestigious title, which was last won in 2017, will be returned to The Netherlands.

The Netherlands didn’t arrive as favorites. The good shape of the Dutch team was noticeable last Friday when they placed themselves as third for the finals on last Sunday.

Good start
Maikel van der Vleuten was the first one from the team to start. Together with his Olympic bronze horse, Beauville Z. Maikel rode a perfect clear round, just as he did on the first day. Not only his team provided happily from his result, but he also was eligible for an extra money bonus for riding a double clear.

Second rider Willem Greve added, together with his Carambole, another clean round for TeamNL. The 17-year-old Carambole (Cassini I out of Normandië IV by Concerto II, breeder Jens Ritters from Krumstedt) showed his excellent form. With a double clear round  the team of Rob Ehrens looked already for a podium place halfway through the start list.

Sublime finish
Sanne Thijssen seemed to go for a third clear round for the team together with her willing Con Quidam RB, but the combination made a mistake in the end. After Sanne, The Netherlands was still on a shared first place together with the Olympic champion team of Sweden. Because the last Swedish rider made a mistake it was only Harrie Smolders’ job to make a clear round and stay within the limited time to take the first place. And he did, in a forward sophisticated ride the combination didn’t fell into any problems and took the win for The Netherlands. “the assignment was easy” joked Smolders afterwards. “I had to ride a clear round, said the boys, so I did”.