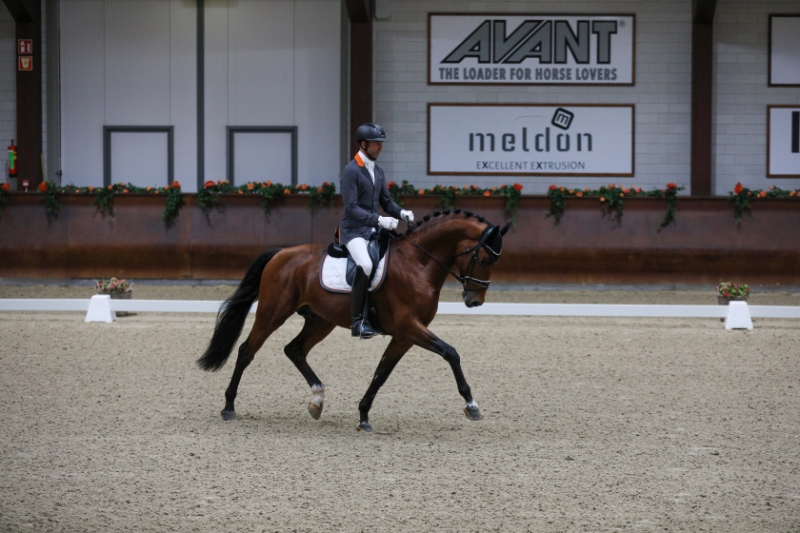 The first class of the Anemone Horse Trucks Stallion Competition Dressage 2021/2022 has finished! Three Gelder stallions kicked it off in Kronenberg. Mandienio WL (s.Glamourdale), Mexpression (s.Expression) and Markant BK (s.Wilson) were up for the battle.

Chairman of the judges Marloes van der Velden tells: “We have seen three lovely tests of the Gelder stallions. These are three work-willing horses that move with a lot of power and they all let themselves be ridden in an unruffled manner.”

Mandienio WL (out of Widieni keur sport-dres by Parcival) was the first and only stallion to be presented in harness. The Glamourdale-son, bred by K. and J.J. Pestman from Winsum, showed a clean test. He was driven by the registered owner Alfons Engbers. “We as a jury have enjoyed ourselves. If you look at the test in its entirety, you see he stands out in his movement mechanism. He has such pure gaits, and the canter is his strongest aspect at the moment. He gladly lets himself be presented and is very obedient. In the rideability he still has some steps to take, but he is clearly willing to work”, says judge Etiënne Raeven afterwards. Both the canter and the functionality of the conformation were valued at a 9. The total score was 83 points.

The Expression-offspring Mexpression (out of Colinda ster PROK by Koss) showed a strong performance. The stallion is bred by H.A. Bruil of Terborg and registered to B. Verwaijen of Eerbeek and J.D. Jonker of Apeldoorn. He was presented by Dennis Ausma. “We thought he was neatly presented. He moved through the arena with lots of self-carriage, power and elasticity. He demonstrated lovely extensions and easily collected on the hind leg. In the trot he missed the connection from the hind leg to the forehand at times. The walk has good rhythm and freedom in the shoulder. In the canter he also displayed his ability for extensions and collections”, commented judge Janine van Twist afterwards. The stallion received a 9 for the walk, canter, submission and general impression, bringing the total up to 89 points.

Markant BK (out of Wiezelma ster pref by Sirius) demonstrated his rideability under Jean-René Luijmes. The Wilson-son is bred by L.W.M. Kollenburg of Best and is registered to B. Verwaijen of Eerbeek. “Markant BK was also presented in a nice manner. The walk is spacious and pure in which he beautifully follows the hand. The trot shows a good rhythm and lots of power. The extensions may be more fluent. The canter stands out in his powerful jump and elasticity”, explains Janine van Twist after the test. The Gelder stallion was awarded 8.5s for the walk and canter, raising the total to 81 points.