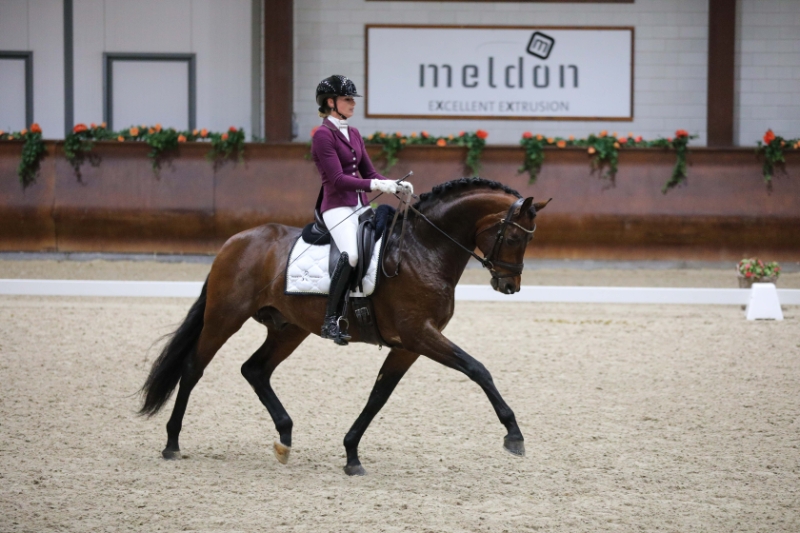 In Kronenberg the program continues with the Anemone Horse Trucks Stallion Competition Dressage. In the four-year-old class it was McLaren, presented by Dinja van Liere, that demonstrated his talent in every way. The Morricone-offspring was awarded 95 points and thereby remained ahead of Mowgli V.O.D. (s.Desperado). Dinja van Liere claimed two spots on the podium. Aboard Mauro Turfhorst (s.Zonik) she placed third.

McLaren (out of Samatha by Sir Donnerhall) is bred by U. Toenjes of Ganderkesee and is owned by Reesink Horses in Eibergen. “McLaren has a light-footed trot with lots of strength in his hindquarter. The canter is uphill, powerful and supple. The stallion moves with lots of balance and was perfectly presented. In the walk he could place his hind leg further under the body”, explained Janine van Twist afterwards. The stallion received two tens, for the trot and submission. The end result was 95 points.

The Desperado-son Mowgli V.O.D. was in the capable hands of Franka Loos, who won the M-class with Las Vegas earlier that night. Mowgli V.O.D. (out of Zoriana elite pref prest IBOP-dres PROK by Jazz) was bred by A. van Os of Sprang-Capelle and is registered to the breeder and hi son Jorg and S. van der Lei of Sint-Michielsgestel. “The trot has lots of schwung and elasticity. He could develop slightly more power. In the canter he has abundant rhythm but could be better connected to the front. He is well-ridden and showed solid transitions”, explained Janine van Twist. The stallion received three 9.5s, for the trot, submission and general impression. This brought the total to 92 points.

Dinja van Liere also presented the stallion Mauro Turfhorst (Zonik out of Hidaylia ster by Negro). The stallion is bred by J.W. Greve of Haaksbregen and is owned by Turfhorst Stud in Wezep and Reesink Horses in Eibergen. “The stallion showed abundant rhythm and impression in the trot. He could develop a tad more strength, which can primarily be seen in the extensions. The canter is nicely jumped, spacious and uphill. The horse displays self-carriage and overall, it was a lovely ride”, spoke Janine van Twist after the test. The stallion received four 9s for the walk, canter, submission and generall impression. The total result was 88 points.

Unable to visit the stallion competitions? All shows and the final are broadcasted live via KWPN.tv. The livestream is free of charge for both members and non-members.