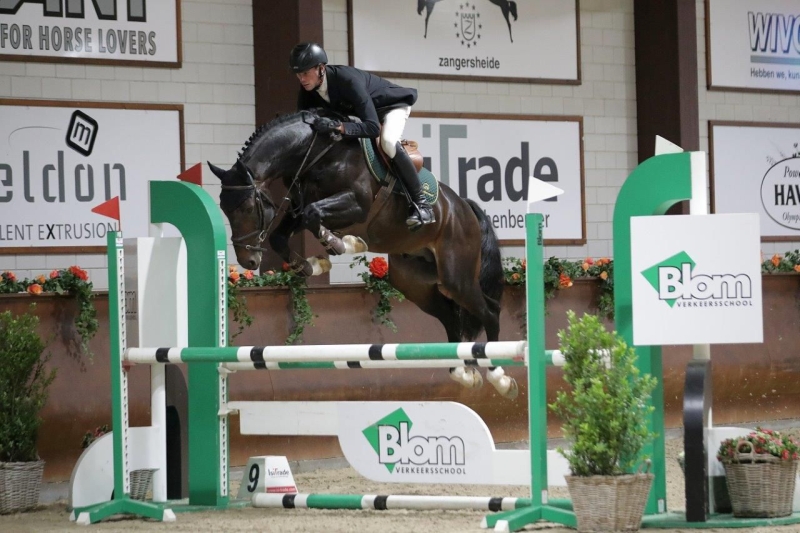 The first leg of the Blom Stallion Competition has just been concluded with an interesting group of stallions in the L-class. Ten of them kept clear in both rounds, all of them KWPN-approved stallions.

Bart van der Maat had three trumps this competition and performed a double clear with the KWPN-approved stallions Mattias (Comme Il Faut out of Ietrichta by Catoki, bred by H. Nijborg of Gieten of Reinie Tewis and Jan van Koote) and Mister Hornet DDH (Cornet Obolensky out of Arnacquine du Mesnil by Quarnac du Mesnil, bred by Jean-Luc Lebourgeois and owned by De Havikerwaard), that both made a great impression at the Peelbergen Equestrian Centre. “These are two outstanding stallions. Mattias is a large horse that already performs the course with ease despite he is still rather green. He had a busy breeding season at Reinie’s and he is back in my stables for merely four to five weeks now. I brought him to the shows twice and here he immediately did well”, says Bart van der Maat. “He needs a little more time but the feeling he gives me is extraordinary. I truly think it is a horse that will jump the big classes in the future.” Bart van der Maat is also enthusiastic about Mister Hornet DDH, that was previously successful with Demi Dijks. “He arrived in my stables last Monday and it was just a matter of getting in the saddle and on we went, this tells a lot about his attitude. He is very light-footed, super to ride and also gives me a good feeling. It is great to ride here with such stallions and amazing for the breeders, certainly after the Corona period, to see all the stallions in one place again. It was hard work for me this class with multiple stallions, but it is great to see it being so appreciated by the breeders.”

The following KWPN-approved stallions also remained clear in both rounds: