The bidding has started, have you made your choice yet? 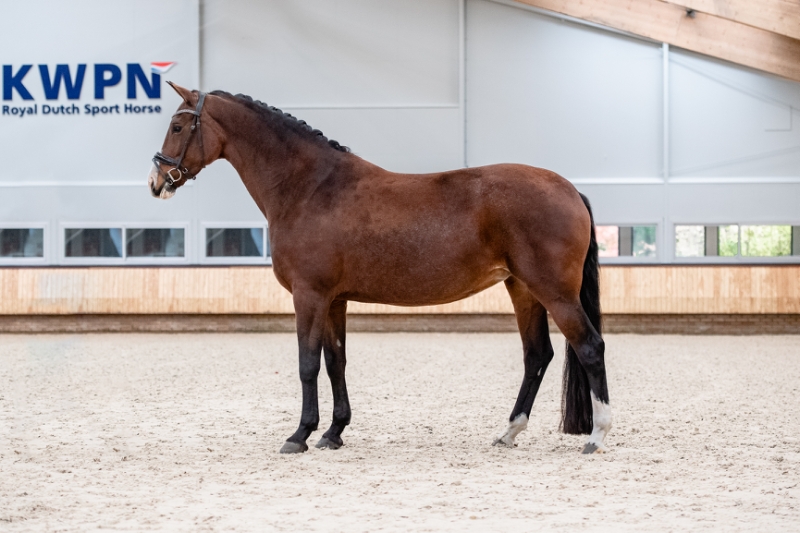 It has been Friday 10AM and that means that bidding has started on the KWPN Online Broodmare & Embryo collection. 23 mares and two interesting embryos will go under the digital hammer coming Monday from 8PM!

Proven broodmares
As a full sister to the international 1.50m show jumper D'Artagnan on which Santiago Lambre was victorious, Ebluemellie has excellent pedigree. In addition, she is the half-sister of several international showjumping horses, including the only seven-year-old QH Bamboleo Santo Antonio (s.Cidane), who is already ridden at 1.45/1.50m-level by Yuri Mansur. Ebluemellie is expecting a foal next year from the legendary stallion Tangelo van de Zuuthoeve. By the Grand Prix stallion Chatinue, Chin Chin daughter Byazinthe is expecting a foal. Chatinue himself jumped at 1.60m level under the Mexican flag and is a son of the world-class progenitor Chacco Blue. In addition, Chatinue is the half-brother of Darragh Kenny's former top stallion Balou du Reventon and of the foundation stallion Balou du Rouet.

Talent for the future
At the studbook inspection Maylympia G managed to convince and she did not only earn the ster predicate with a nice score of 80/85, but also an invitation to the National Mare Championship. Next year Maylympia G expects a foal from the talented stallion So Perfect. The impressive Easy Game-son Hermès wrote many impressive Grand Prix scores to his name last year under the saddle of Dinja van Liere. In this collection, he is accompanied by Maya-Amanda N. This Daily Diamond daughter passed the mare test with several times an eight on her list for trot, canter, suppleness and posture and balance. She descends from a Gelder damline which is famous because of the stallion Henkie (s.Alexandro P), who participated several times in the finals of the World Championships for Young Dressage horses under Adelinde Cornelissen.

Young stallions
With her special colour Jarissa (s.Negro) is a striking appearance in this collection. This mare passed the mare test with a nice list of marks and a total score of 80.5 points. With a 9.5 for her attitude, she clearly honours her breeding direction. Next year, she is expecting a foal from the young stallion Mac Madison (s.Ferdinand). Several mares in this collection are in foal to talented young stallions. Like the Dream Boy daughter Irida, she is expecting a foal from the stallion Bloomberg (s.Bon Coeur). The talented mare Europa (s.Andretti), who competed at Small Tour Level herself, is in foal to the promising stallion Florida TN (s. For Dance). Europa is a half-sister of the small tour horse Bobo (s.UB40) and descends from the leading Charites-damline. Mother Salvinia is known as grandmother of the promising KWPN stallion Ladignac (s. Zonik).

Bidding starts
Bidding on the 23 mares and two embryos is possible from today. The auction closes Monday, November 15th from 8PM. Are you not registered as a bidder yet? This can be done easily, free of charge and quickly via www.kwpn.auction. For questions you can contact us via salespromotion@kwpn.nl, +31 341-255511 or you can call Wim Versteeg: +31 6-54201800.