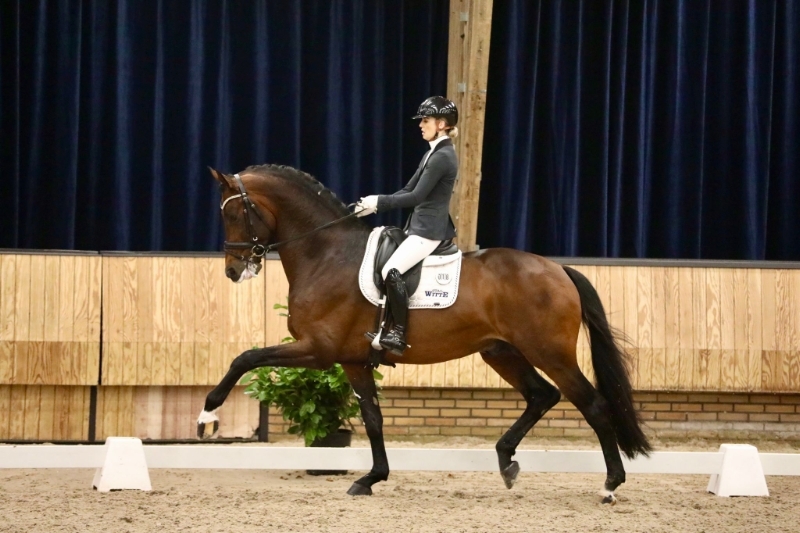 Following the Z/ZZ-L class, the jury was comprised of Joyce van Rooijen-Heuitink and Bart Bax.

Another win in the pocket for Las Vegas (out of Dalia Delin preliminary keur PROK by Wynton). The sizable stallion bred by J. Deenen of Heijen also won this round by a landslide, today he scored 91 points. Las Vegas is owned by N.F. Witte of Schijndel and Paardencentrum de Dalhoeve in Ommeren. Presented by his rider Franka Loos, he scored an 8.5 for the walk. “In the trot he shows such an appealing frame, he is powerful with abundant push and an extremely elegant front leg”, tells Joyce. The trot was rewarded with a 9.5. About the canter, Joyce says: “He canters with lots of power and uphill withers, he has so much presence.” For the canter and submission, Las Vegas gets two 9s. The overall impression of this “very complete dressage horse” is marked with a 9.5.

Tonight, Lord Romantic obtained the solid score of 82 points. The Don Romantic-son (out of Veroniek elite pref sport-dres D-OC by Krack C) is bred and owned by A. van Erp of Heesch. The stallion was presented by Saskia van Es and scored an 8 or higher for each and every aspect. The walk received an 8. “His walk is pure and active, but could be more spacious”, according to the jury. For the trot the dark bay stallion received a lovely 8.5. In the canter Lord Romantic shows a good technique, receiving an 8. The submission is awarded an 8 and the overall impression an 8.5. “He is a horse with expression and a functional conformation”, concludes Joyce. Final score for Lord Romantic and Saskia: 82 points and a second place.

Adelinde Cornelissen guided the stallion Lloyd (Governor out of Hynola M elite IBOP-dres D-OC by Charmeur) to 82 points as well. The ex-aequo ruling determines it is a third position for Lloyd. Lloyd is bred by Jeroen Hendriks and Berlinde Middelbrink of Loo and registered to Gerard Korbeld and Adelinde Cornelissen. For the walk, the stallion receives an 8.5, the jury explains: “The walk has great elasticity and athletic use of the body, for a higher grade he could show more flexion in the hock.” The stallion scored another 8 for the canter. “We have witnessed a pleasant, obedient and overall lovely performance”, says the jury about the submission for which the Governor-son receives an 8.5. The overall impression is valued at an 8.