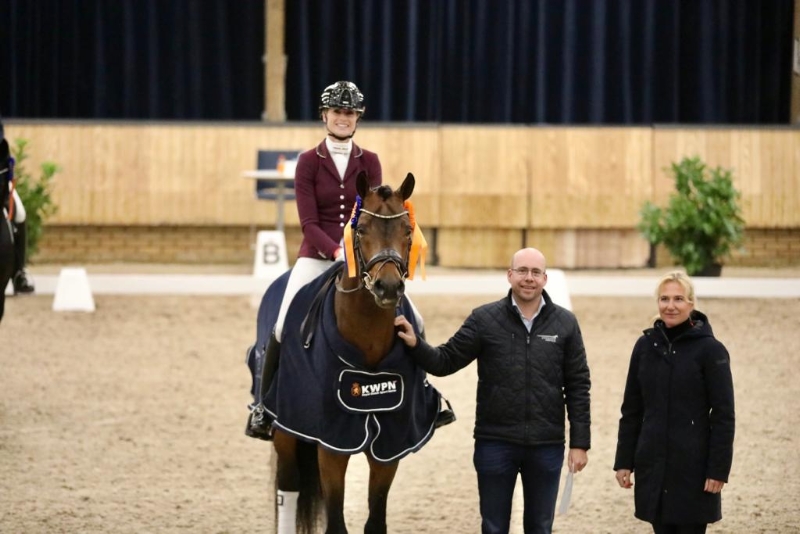 Following the M-class, the jury of this age category was comprised of Joyce van Rooijen-Heuitink and Bart Bax.

McLaren (out of Samatha by Sir Donnerhall) is bred by U. Toenjes of Ganderkesee and registered to Reesink Horses in Eibergen. Ridden by Dinja van Liere, he secured another win, scoring 90 points this time. For the walk, McLaren received an 8. “The trot is elegant, with lots of elasticity and in the lateral movements he shows abundant posture, balance and suppleness”, tells Joyce. The stallion is therefore granted a 9 for the trot. About the canter Joyce says: “This was his best gait today. He was always uphill and a powerful jump”, the Morricone-son scored a 9.5 for it. The submission was also rewarded a 9.5. The overall impression a 9. Joyce concludes: “This is a horse with expression, light-footedness and he is overall very complete.”

The stallion Maddox Mart (Henessy out of Fanirma elite IBOP-dr PROK by Bordeaux) is bred by C.W. van Baalen of Gellicum and registered to Gestüt Schafhof in Kronberg. Jessica Lynn Thomas guided the stallion to 87 points tonight. The walk received an 8.5. According to the jury, the horse has a good walk with abundant impression and space. “The trot is elegant; he has a beautiful front leg. He is a high-legged and light-footed horse”, this resulted in a 9 for the Henessy-son. For the canter he was awarded an 8.5, for a higher mark he could move more uphill. The submission was valued at a 9, Joyce explains: “The horse was presented in a pleasant manner, he showed great harmony and was consistent throughout the performance.” The overall impression was graded an 8.5.

The stallion Mauro Turfhorst (Zonik out of Hidaylia ster by negro) was also presented by Dinja van Liere. The Zonik-son is bred by J.W. Greve of Haaksbergen and registered to Stoeterij Turfhorst in Wezep and Reesink Horses in Eibergen. Dinja obtained 85 points with the stallion this round. For the walk, the stallion gets an 8.5 as the jury praised his ground coverage and elasticity. “The horse has an elegant and light-footed trot, with lots of balance for a four-year-old horse”, says Joyce, an 8.5. The 8.5 marks are also awarded to the canter and submission. Regarding the overall impression the jury comments: “This is a complete horse with three good gaits. The stallion has presence but could develop more strength in his hindquarters.” The overall impression got valued at an 8.5.

All competitions and the final can be watched live via KWPN.tv. The livestream is free of charge for both members and non-members.

Overview page of the stallion competition