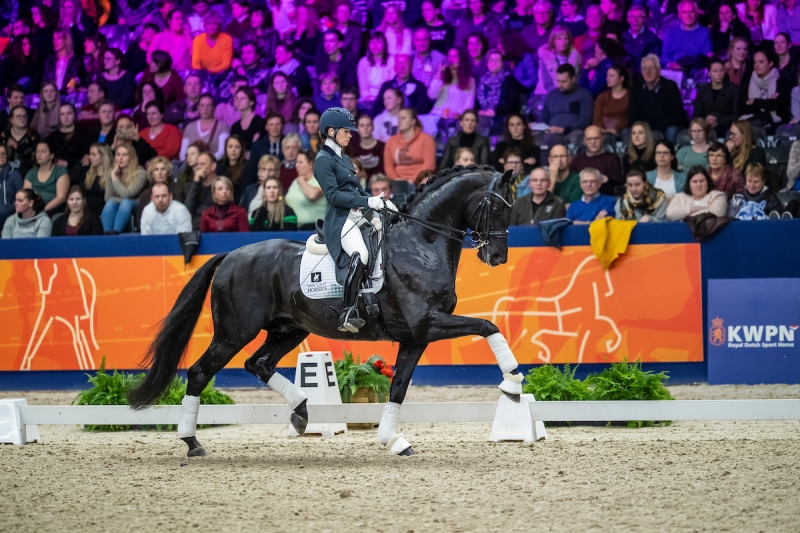 In January, ‘The horse of the year 2021’ will be announced again, but who were the winners of 2020? We have listed them for you.

Glamourdale
Champion stallion Glamourdale has won the title in the dressage direction with by far the most public votes. Last year, almost 2.000 horse lovers have voted for Glamourdale on the KWPN website. The KWPN-approved stallion was definitely the favorite. Glamourdale (Lord Leatherdale out of Thuja stb pref s.Negro, breeder Joop Rodenburg of Ouderkerk aan den IJssel) has already provided several highlights. For example, the black eye-catcher was proclaimed champion as a three-year-old at the KWPN Stallion Show, subsequently approved with a nice score of 85.5 points, four years later he won the World Championship for seven-year-old dressage horses and made a promising Grand Prix debut with Charlotte Fry. In 2021, he made his debut in the International Grand Prix with a score of 76.4% in the Grand Prix Special.

Dana Blue
Her qualities and winning mentality have already led to many successes and she also fulfilled her favorite role in the battle for the title of KWPN Horse of the Year in the jumping direction: The show jumping mare Dana Blue (Mr. Blue out of Tulana prest s.Hemmingway), bred by Jan Bocken from Weert, received by far the most public votes last year. The successes of Dana Blue are the result of a very good cooperation between the Bocken family and the Van der Vleuten family, who owned the special gray mare for many years. Dana blue has already scored many victories at CSI4* and CSI5* shows.