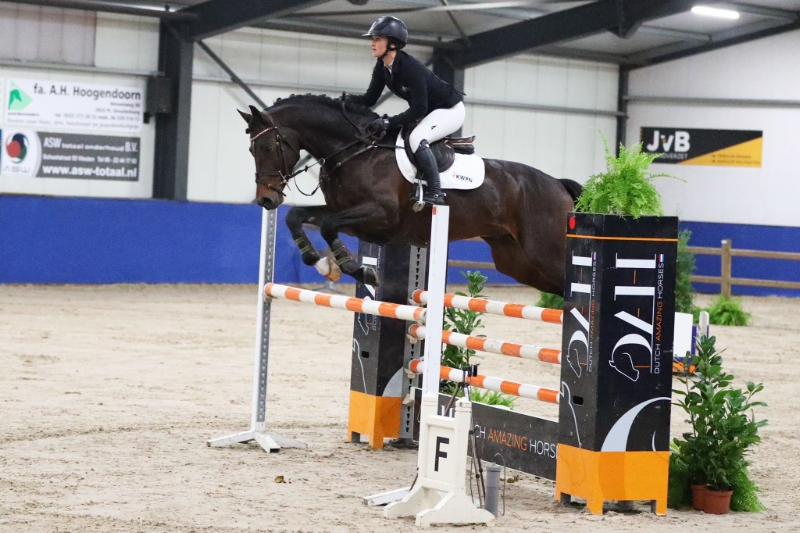 The jump-off in the M-class went down to the wire. It was For Friendship VDL (s.For Pleasure) that grabbed the win in the end, repeating his feat of the Peelbergen. Fourteen stallions entered the ring tonight, nine of which advanced to the jump-off. Among those nine candidates were seven KWPN-stallions. The entire top-three of the Peelbergen qualified for the jump-off in De Meern as well.

The third on the list in the jump-off was Love Connects (Connect out of Hello Twiggy BB elite IBOP-spr sport-spr D-OC by Quality Time, bred by W.Chr. Braatbrummelkamp of Wenum and registered to Plijnaar Vastgoed B.V.) ridden by Megan Laseur. The pair took over the lead until For Friendship VDL was the second to last to start. By 0.01 second, For Friendship and Lennard de Boer nipped into the first place, demoting Love Connect to runner-up. La Costa ES (Mosito vh Hellehof out of Isolde ES elite sport-spr PROK by Cumano, bred by Egbert Schep) claimed a solid third prize with rider Gerd Jan Horsmans.

Lambada Shake AG (Aganix du Seigneur out of Grappa AG by Spartacus, bred by Alex Gisbertz) placed fourth. The by Pieter Keunen bred and ridden Entertainer-son Lambrusco (out of Total Touch stb-ext pref prest by Lux) followed on the fifth rank. This stallion is appointed to the KWPN Performance Test. The seventh prize of the night was obtained by Legend VDP (Grand Slam VDL out of Cendy VDL elite IBOP-spr sport-spr PROK D-OC by Triumphe de Muze, bred and owned by A. and A.J. van de Pol of Bathmen).

Lingo van de Watermolen (Connect out of Happy Wiggy by Carambole, bred by Jan Greve) was well on his way with rider Steven Veldhuis until an unfortunate rail down on the last fence. This resulted in an eighth position for the duo. Lay Out (Verdi out of Vallei Roos elite prest PROK by Tangelo van de Zuuthoeve, registered to J. van Meever of Meerkerk and bred by J.J. Ilbrink and J.H. Ilbrink-Lueks) also knocked down a pole and ended on the ninth position.