Bidding started on the collection of three-year-old stallions 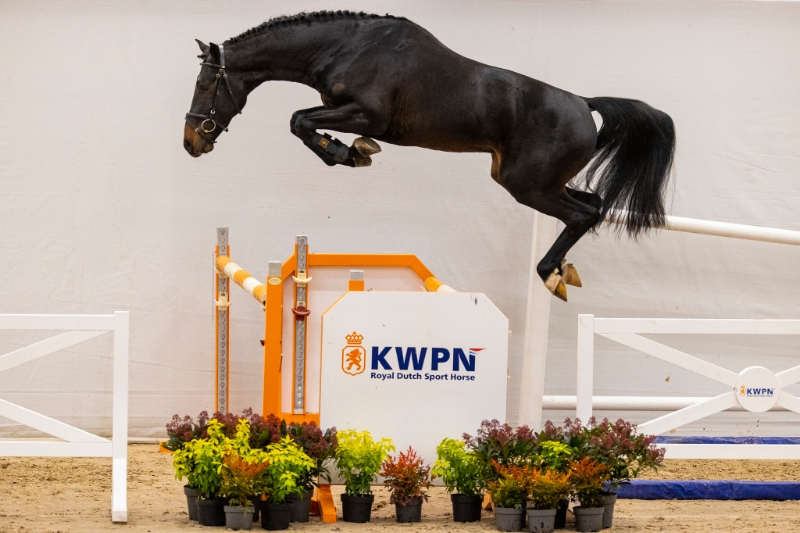 Including stallions out of damlines of approved stallions and many (inter)national Grand Prix dressage horses this collection enticing, to say the least. The jumper stallions form no exception, all originating from lineages that are packed with international sport horses.

As of today, biddings are open! 20 talented stallions will fall under the digital gavel on Monday night, January 3rd. Looking for a great start to 2022? Invest in these promising sport horses!

Established sports lineage
The remarkable jumper Jappeloup (s.Comme Il Faut) is presenting his first crop of sons at the stallion show this year, among them Obiku, who descends from a solid sports lineage. His dam Hasijgje is a half-sister of the international 1.60m jumper Coral Reef Aajee (s.Lupicor) of Ann Knight Karrasch and the 1.50m ranked Boevee (s.Lupicor) of Kim Emmen. Granddam Usijgje additionally produced the 1.40m showjumper De Uno (s.Numero Uno) and this direct branch of the Sijgje-line also produced the international 1.45m horse Capri (s.L’Esprit) of Anastasia Bondarieva. In the second generation, the top progenitor and Grand Prix-stallion Andiamo adds his performance genes to this pedigree.

Second season at stud
Last year, the impressive Just Wimphof made his winning debut at ZZ-Zwaar level with Renate van Uytert. Meanwhile, he is also earning his stripes in breeding and this Oridion was born after his second season at stud. In the third generation of this established damline we find the foundation mare Charites. She is renowned for being the dam of Hans Peter Minderhoud’s Olympic partner Exquis Nadine (s.TCN Partout) as well as the KWPN-approved ZZ-Zwaar stallion Kroonjuweel (s.Belisar). Oridion’s dam Kokette Katinka scored 78,5 points for her IBOP and performs at Z2-level at the mere age of six years. Grand Prix horses such as Karolus van Wittenstein, Bond’s Painting and Zygrande le Coupied also directly descend from this family.

Hermès makes an impression
At only nine years of age, sire Hermès is making headlines with his results in international Grand Prix tests. Ridden by Dinja van Liere, this light-footed stallion undoubtedly has a big future ahead of him and despite limited opportunities in breeding, he also seems of great value as a sire. In the second generation, Olando WD inherits the precious genes of top progenitor Ferro, also active at the highest level himself, plus he produced a vast array of Grand Prix horses. Dam Sheilandra represents the Landra-lineage, also basis of numerous successful showjumpers. Granddam Irenical is for example also the granddam of Grand Prix jumper Cuplandra (s.Upgrade).

Performance family
Olivius van de Vrendt is sired by I’m Special de Muze. This stallion jumped at international 1.50m height with Zoï Snels and does not forsake his fantastic origins by developing into a top progenitor. Offspring such as Scuderia 1918 Mr Jones, Matcho van de Mishagen and Ibiza Z are a few of his best promotors at the international shows. Here, he is paired to an excellent damline. Dam Charming Sinaa jumped at 1.30m level herself and already produced the 1.40m showjumper Grenadier Volo (s.Numero Uno) of Chloe Reynolds. She is also the half-sister of the successful Grand Prix jumper Mac Kinley (s.Goodwill) of Mario Stevens. Out of this direct branch of the distinguished Sinaa-line, we also find 1.50/1.60m jumpers such as Disinaa, Floris TN, Rocco, and Eyes Blue de la Sina.

Fully accepted by veterinarian
Are you looking for a potential sport horse or interesting stallion? Registering as a bidder can be done easy and free! The stallions taking part in this auction have all undergone a full veterinary inspection, both radiological and clinical. For questions or more information, please contact salespromotion@kwpn.nl.