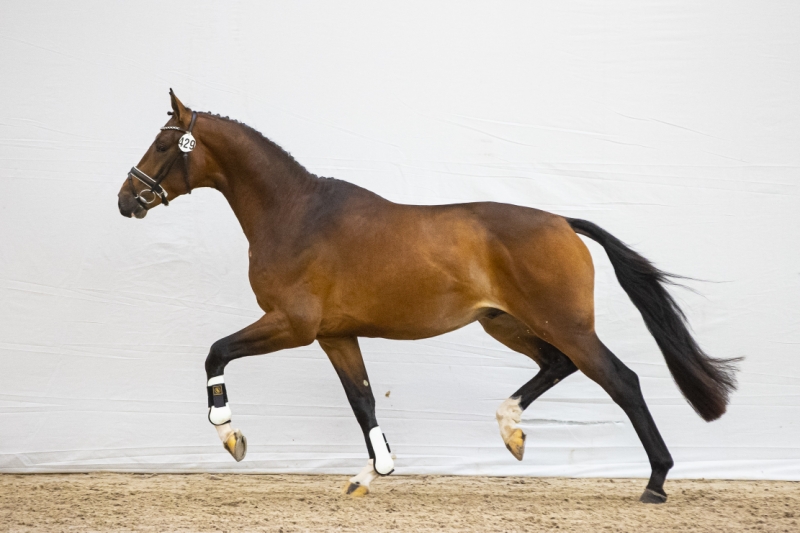 The new year has started and that means that today the first KWPN Online Auction of the year comes to an end. Bidding on this collection of the KWPN Online Stallion Auction is possible until tonight, at 20.00hrs the auction closes.

So far, bidders from Bulgaria, Germany, the United States, Denmark, Norway, Portugal, Belgium, Hungary, Ireland, the Netherlands and South-Africa show plenty of interest in the stallions that are selected via the first-round viewing.

Full sports exam
The auction stallions all underwent a full veterinarian sport examination, covering both x-rays and a clinical exam. A KWPN-inspector also assessed each stallion during the first-round viewing, the inspector can be contacted for more information about these stallions.

Many international sport horses
In the pedigree of Okido, two solid performance lineages were brought together. Sire Carrera VDL jumped at the highest level with Jur Vrieling, is bred out of a sister of the Olympic stallion Tinka’s Boy and makes a great impression in breeding thanks to promising sons such as Kallmar and Kincsem. Dam Chinula-N passed her IBOP test with 78.5 points and together with Diamant de Semilly she already produced the international 1.40m showjumper Khinula N of Kevin Beerse. Moreover, she is a half-sister of the international 1.50m stallion Unlimited (s.Voltaire). Granddam Hinula is the full sister of the German progenitors Lancer I-III and can also be found in the second generation of the pedigree of 1.60m stallion Chin Quidam VDL (s.Chin Chin) of Darragh Kenny.

Olympic genes
The Grand Prix-stallion Hardrock Z may look back on a successful sports career at the highest level. He participated in the World Equestrian Games and Olympic Games with Emanuel Andrade. Now as a breeding stallion, the Heartbreaker-son is well on his way and in the pedigree of Octopus he is paired to an established sports line. Obtaining 80 points, dam Fanny passed her mare test with flying colours and she is the half-sister of the international 1.45m showjumper Blom’s Eligius (s.Ustinov) and the international eventer horse RF Southern Command (s.Ustinov). Via strong progenitors and money-makers Verdi and Lux, we find the mare Desiree. She stands at the basis of international sport horses such as Aerosmith (s.Odermus R), Eto’O (s.Cardento), Don G (s.Heartbreaker), Ebell K (s.Campell VDL) and Falco (s.Cantos).

Successful dressage horses
The dressage horses out of the collection of the KWPN Online Stallion Auction deserve the limelight as well. We have Odjee Toto, a son of the Grand Prix stallion GLOCK’s Toto JR. His dam earlier produced the sensational mare Koco Linda (s.Glamourdale). In the prestigious final of the National Mare Championships this eyecatcher placed fourth and subsequently she made an impression in her IBOP by scoring no less than 83,5 points. Colinda is a half-sister of the Small Tour dressage horse Harmony’s Wamberto (s.Rousseau), that was elected champion of the KWPN Stallion Show as a three-year-old before being approved in America and the ZZ-Zwaar horse Zidane (s.Ferro). Granddam Olinda is a half-sister of the Grand Prix dressage horse Witschge (s.Ferro).

Sons of Grand Prix stallion Total Hope
At merely nine years of age, Total Hope made his promising Grand Prix debut in 2021, thereby following in the footsteps of his legendary parents Totilas and Weihegold. This genetic gem also seems to be a great asset to breeding. In Orvin B, he was crossed with a solid branche of the established Karin-line. Damsire Bojenge is successful in the international U25 classes with Jazmin Yom Tov and then the maternal line features the mare Pamora, a half-sister of the Small Tour horse Tamora (s.Olivi) and the ZZ-Licht dressage horse Scaramouche (s.Metall). This direct lineage produced a wide range of international Small Tour horses as well as the Grand Prix dressage horses Whitman (s.Rhodium) and Zamora (s.Krack C).

Register as a bidder
Are you not yet registered as a bidder? It is simple, quick and free via kwpn.auction. We then also keep you updated on all KWPN auctions. Our sponsor Horses2Fly can support you in international transportation. For questions or more information, you can contact Wim Versteeg: 06-54201800 or via salespromotion@kwpn.nl.