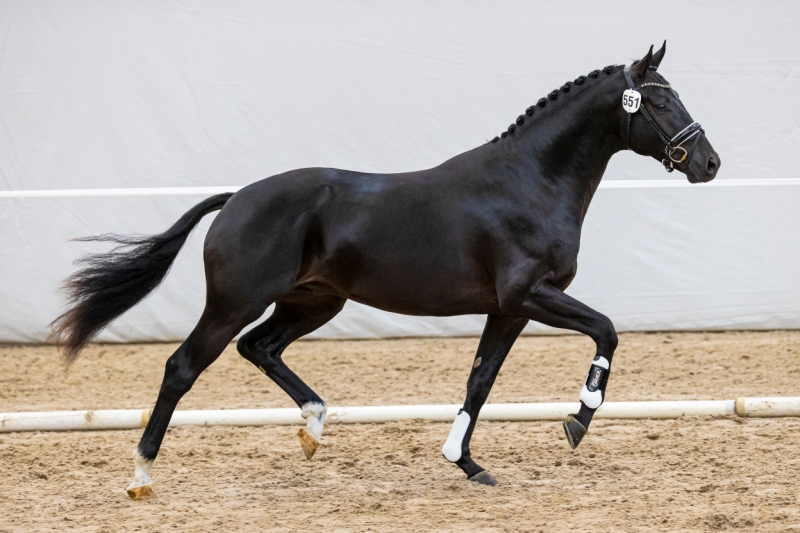 With 42.000 euros, the GLOCK’s Taminiau son Onyx was the highlight of this auction tonight. It was an exciting bidding duel between bidders from Belgium, Germany and the Netherlands. At the end a Dutch bidder took the win.

The 20 stallions in this auction brought in an average of 18.450 euros and 80% of them have been sold and 9 of them have a future abroad. In addition to a buyer from the Netherlands, buyers from Portugal, Hungary, Chile, Germany, Poland, Russia and the United Kingdom also succeeded.
RESULTS CAN BE FOUND HERE

Deparon U.S. son Orbison has been sold to Chile for 32.000 euros and the Glamourdale son Olivier van de Gathe also sold for 32.000 euros. The most expensive showjumpers of the evening were Obiku (by Jappeloup) and Emerald van ’t Ruytershof son Ole. They both changed owners for 22.000 euros.

This was the very first auction of 2022. Rianka Hazeleger: ‘’Unfortunately we were also forced to organize the first viewing behind closed doors this year. So we are more then grateful that we could again count on the trust of many sellers, buyers and bidders. This has resulted in a considerable increase in the average price in this 4th edition of the Online Stallion Auction.’’