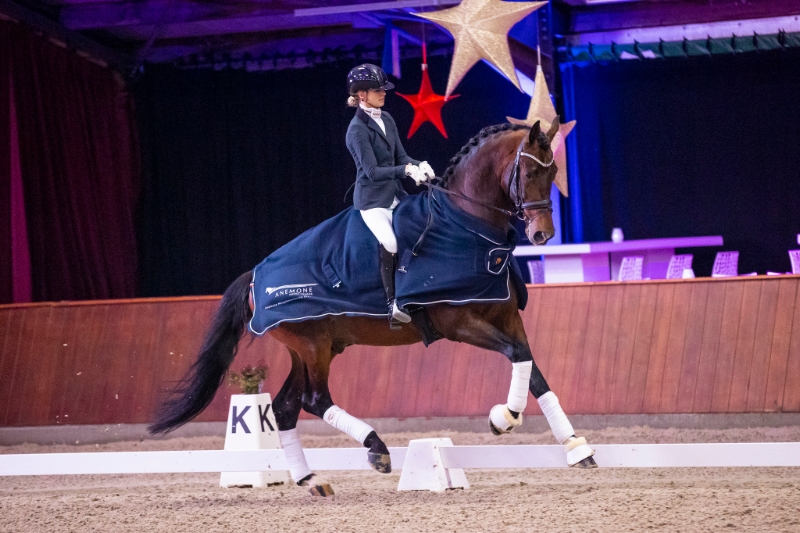 The jury for the M-class also consisted of Veronique Roerink and Monique Peutz.

It was 1 point difference that narrowly pipped Lennox U.S. (Grand Galaxy Win out of Herarona elite IBOP-dr D-OC by Rousseau, bred buy B. Wilschut of Bosschenhoofd) in third place. Jill Bogers guided the stallion to a solid score of 85 points. Lennos U.S. is co-registered to J.M. van Uytert of Heerewaarden, P. Schockemohle of Huhlen and B. Wilschut of Bosschenhoofd. “The stallion gave us a performance that radiated so much harmony, he kept his focus on his rider,” praises Monique. The trot is light-footed and has a good technique, the jury rewarded this with 8,5 points. For the walk, the stallion received an 8. “The canter is consistent and with a good jump to it, but at times we would like to see him cover more ground and be more forward. His ability to collect on the other, was very good”, assesses the jury. For the canter, Lennos U.S. scores an 8.5. The jury was especially pleased with the submission: a 9. The overall impression got an 8.5.

Dinja van Liere steered Lowlands (Millennium out of La Donna S by Donnerball) to a respectable second place. The by B. Schrapper of Groenheim bred and at Iron Spring Farm in Coatesville registered stallion received 86 points. The jury is enchanted by harmonious image and quiet contact. “We found the trot light-footed, effortless and with abundant balance”, explains Monique. For the trot the stallion scored an 8.5. The walk was found to be pure and with a great body-use, a 9. “For the canter he could cover more ground forward and upward, but he did collect on the hindleg quickly and easily after. A highlight were the lovely simple changes”, for which an 8 was given. For submission, the combination obtained a 9 and the overall impression was granted an 8.5.

Like the previous times, Las Vegas (Ferdaux out of Dalia Delin ster keur PROK out of Wynton) was victorious. The Ferdeaux-son obtained the exact same score as in Ermelo: 91 points. The impressive stallion is bred by J. Deenen of Heijen and is registered to N.F. Witte of Schijndel and Paardencentrium de Dalhoeve in Ommeren. The jury says it enjoyed the performance of Las Vegas. “It is an impressive horse that is eager to work with his rider,” starts Monique. “In the trot he has lots of suspension and such an uphill front”, Monique continues. The trot is rewarded with a beautiful 9.5. For the walk, the stallion scores an 8.5. About the canter, the jury adds the following: “What a power and energy! He could show more relaxation and use his back a little better.” Minor comments apparently, as the stallion received a 9.5 for the canter. For both the submission and overall impression the 1.80m-measuring stallion is granted a 9.