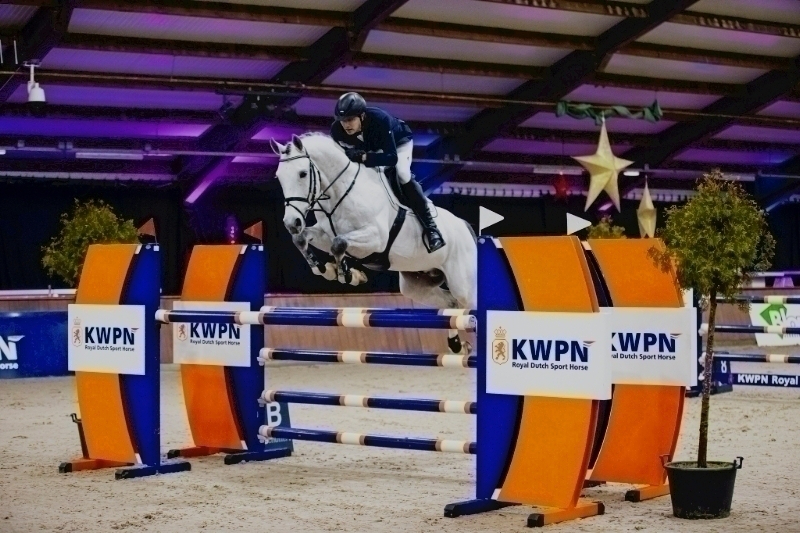 The Blom Stallion Competition Jumping also took place in Exloo tonight. The Z and ZZ classes were combined and were concluded by a fast jump-off. Seven stallions made their appearance at this level, among them three KWPN stallions.

Kannan Jr. (Cornet Obolensky out of Van Meta ster sport-spr PROK by Quick Star, bred by and registered to Family Kramer of Oud-Beijerland and Sjaak van der Lei) was in fine form once again, performing two decent clear rounds with rider Wolfgang Zimmerman and in a time of 40,79 seconds he was close to a placement. The KWPN stallion Kincsem (Carrera VDL out of First Buresco elite IBOP-spr sport-spr PROK by Ginus, bred by N. Smit out of Hoge Hexel and registered to M. Houtzager of Rouveen) showed two lovely clear rounds with Rink-Jan Dijkstra, but his time 41,96 was also not enough for prize money. The KWPN-stallion Kallas (Dallas VDL out of Fadessa H2 elite IBOP-spr PROK, bred by A.F.W. Holkenborg of Haaksbergen and registered to T. van de Brink of Nijkerkerveen) was ridden by Dennis van de Brink, unfortunately the stallion knocked down a rail in the first round which impeded qualification for the jump-off.

The victory was secured by Noëlle van der Velde, aboard the AES-approved stallion Just On Time O (s.Zirocco Blue VDL) she stopped the clock at an invincible 38.28 seconds. Bart van der Maat had two aces in hand tonight. Both horses reached the jump-off. Unfortunately, he had one down with Québec (s.Qlassic Bois Margot ZE). His other horse Catch Twenty Two VO Z (s.Catoki) remained clear and obtained the solid second place.