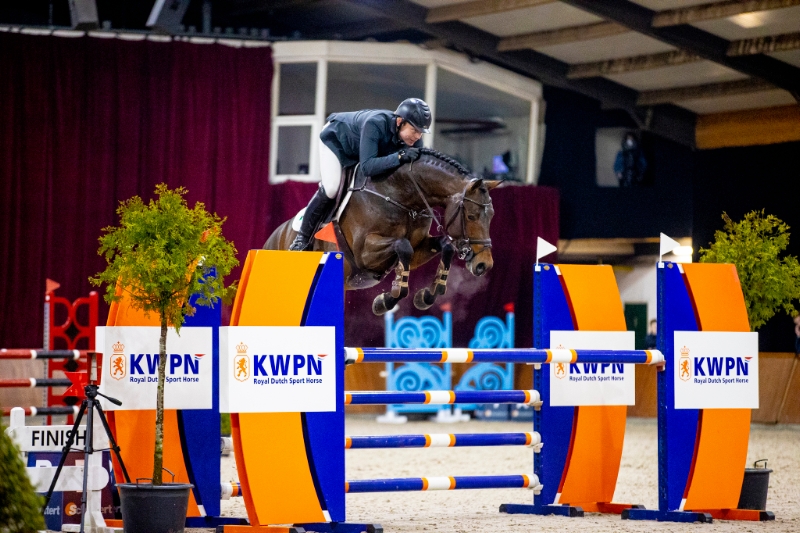 Out of eleven partaking KWPN stallions, ten advanced to the jump-off, where six remained clear and three obtained a prize. Levi VDL (s.Arezzo VDL) was triumphant. The second place was claimed by Liverpool (s.Tangelo van de Zuuthoeve) and the third position was for Lambada Shake AG (s.Aganix du Seigneur).

In the jump-off the participants competed for four prizes, three of which were secured by KWPN stallions. Lennard de Boer obtained a placement twice. Aboard Levi VDL (Arezzo VDL out of Erusa ster EPTM-spr D-OC, bred by E. Reyrink of Diessen and registered to VDL Stud in Bears) he was the first to enter the jump-off and his fast time of 38.05 seconds turned out to be unbeatable. His Hannoverian stallion For Friendship VDL (s.For Pleasure) placed fourth.

Liverpool (Tangelo vd Zuuthoeve out of Dauphine keur pref IBOP-spr by Lux, bred by B. Derksen out of Steenderen and registered to De Radstake in Varsseveld) soed in a time of 38.38 seconds to the second place with rider Robert Puck. The third position was claimed by KWPN stallion Lambada Shake AG (Aganix du Seigneur out of Grappa AG by Spartacus, bred by A. Gisbertz of Beek LB and registered to J. Lammers of Hamont) and rider Pieter Keunen.

Other KWPN stallions that kept a clean slate twice included Verdi-offspring Lay Out (out of Vallei Roos elite prest PROK by Tangelo vd Zuuthoeve, bred by J.J. Ilbrink and J.H. Ilbrink-Lueks of Geesteren and registered to J. van Meever of Meerkerk) and Kristian Houwen, they procured the fifth place. Caroline Mueller and Lord of Farming HS (Balou du Rouet Z out of Doutzen stb by Clinton, bred by Gebr. Bosch of Luttenberg and registered to J. Schuttert of Ommen) also performed a double clear. Noor Kuiboer has recently formed a combination with the KWPN stallion Lingo van de Watermolen (Connect out of Happy Wiggy stb by Carambole, bred by and registered to J.W. Greve of Haaksbergen), the young duo held its own and ended in a respectable seventh place.