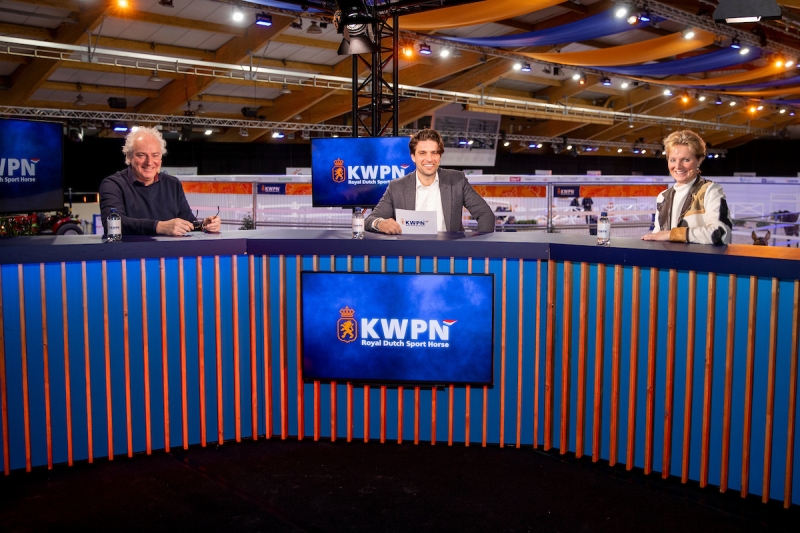 Host Chris de Heer invited member of the General Board Leontine ter Harmsel and breeder Ben Platzer to join him for a studio talk regarding their vision on the future of jumper breeding. Leontine has been seated on the Generald Board for a year and faces an additional challenge in the coming year. Ben Platzer had a fantastic sports year in 2021, highlight being his homebred Loharna-p winning a bronze medal at the Jumping World Breeding Championships for Young Horses.

After a year on the General Board, Leontine ter Harmsel is also tasked with the role as chairman of the Breeding Council Jumping for next year. The Breeding Council was split into a Breeding Council Dressage and Breeding Council Jumping. “I think this decision reflects the times we are in”, tells Leontine. “Breeding becomes increasingly specialised and because of this choice you can place every person in a more specialised role too. The KWPN horse is doing well in the jumping sport, but there are many more riders at 1.50m and 1.60m level than in the old days. A jumper horse is expected to have a lot more scope, I think we must pay extra attention to that area. A showjumper must be quick and electric. The Dutch horse is exactly that, but we still need to keep an eye on it. What I find to be positive aspects of the KWPN horse are the willing character, the appealing models and that we breed very healthy horses.”

Fantastic mare population
Ridden by Nicole Eggens, the Carrera VDL-daughter Loharna-p jumped to bronze at the World Breeding Championships for Young Horses in Lanaken. “Nicole is an enthusiastic rider that takes her time to produce Loharna in a good fashion”, enthuses breeder Ben Platzer. “Lanaken was absolutely fantastic. I have been very lucky with this lineage, that I encountered by chance when I actually went to look at another horse with my brother. Apparently, it was meant to be.” Ben has a mission he would like to pass on to the Breeding Council: “Here in the Netherlands, we have a fantastic mare population and beautiful lineages. I think it would be great if the specialists from the Breeding Council could provide the breeders with feedback how to reach and maintain the highest position on the podium.”