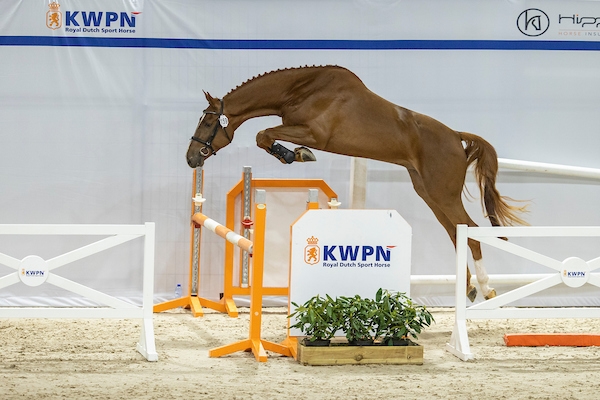 Five quality stallions were invited to the presentation of the premium jumper stallions powered by Pavo.

The attending breeders of the stallions with a KWPN life number were handed a breeder premium of 1.000 euro from the ‘Friends of the KWPN’, the absent breeder will receive it at a later time.

As the only stallion of day one, Oska JDV (Cape Coral RBF Z out of Kalina JDV ster by Carento, bred by Jean Dresen of Valkenburg) of Hendrix Stables was awarded a premium. “This modern, appealing stallion canters with lots of impression and balance. In jumping he stands out for his eagerness, high degree of carefulness and athletic ability on the jump,” explained chairman Cor Loeffen.

Today, the Nixon van ‘t Meulenhof-son Oberon ES (out of Lolita ES ster by Mosito van het Hellehof) of breeder Egbert Schep made a lasting impression. “This is a well-developed stallion, that jumped in a convincing manner in both the first and second round. In jumping, he nicely elevates his withers, demonstrates a good technique, lots of reflexes and abundant athletic ability.”

The freshly declared premium stallion Oreo VDL (Zirocco Blue VDL out of Zoklahoma VDL ster pref prest by Emilion) of breeder VDL Stud also impressed in every aspect. “This stallion has length and size. He started in a very natural manner during both the first and second performance. Oreo VDL bascules nicely and is able to move forward mid-air. When the distance is close, he gets quicker instead of slower and that is highly positive trait of this stallion.” Premium stallion Over The Top (Carambole out of Itsy Ditsy ster by Dantos HBC) of breeder Raeven Sporthorses of Noorbeek and co-registered to H.J. Braat of Wenum Wiesel was also praised by Loeffen: “This is an alluring stallion with a great model. He especially performed well in the second round, in which he jumped with an athletic use of the body, powerful take-off and a good technique.” Finally, the fifth premium was awarded to the correctly built Hashtag Who Else Z (Heartbeat out of Kamille elite IBOP-spr PROK by Comme Il Faut, bred by Alexandra van der Peijl of Oene) of Katherine Brama Walsh. “This sufficiently developed stallion jumped with a good attitude and overview both times. He has a good technique in his hindquarters and is very functional, without being spectacular.”