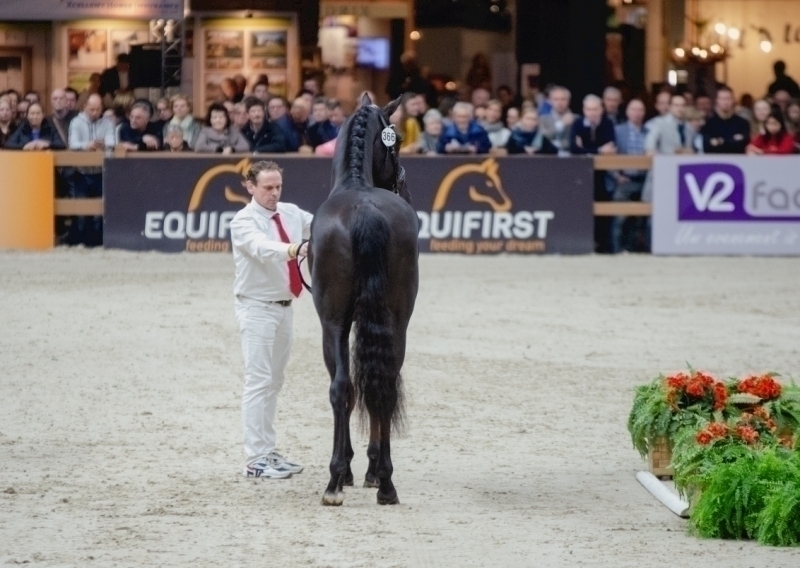 This week’s subject: the stallion’s mother

WHEN:
Prior to the first-round viewing. At this point the quality of each stallion’s dam is evaluated based on information from studbook registration and the mare tests. Between the first- and second round viewing, many of the stallions’ dams are visited and assessed at home, on the property of their breeder/ registered party. Although we already have sufficient information about dams with predicates and those which were registered in the studbook with 70 points or more, such is not the case with Foal Book mares (those not registered in the Studbook), Register A mares or foreign mares in the Netherlands, and mares registered in the Studbook with 65 points or fewer. Therefore, we evaluate these mares and draft reports on them. With respect to foreign-registered stallions and dam-lines which originated abroad, we request information — including additional sport- or inspection data on the dam-lines in question — from the relevant studbooks. This takes place between the first- and second round viewing. Dams stabled close to the border are also evaluated during this period. However, to contain costs, those stabled farther abroad are only evaluated if their son takes part in the performance test. A dam registered in the Studbook with 70 or more points, is evaluated at her home location if her son will participate in the performance test. The resulting dam report is published upon approval of her son.

WHY:
The quality of a potential breeding stallion’s dam is very important. After all, breeding is all about genetics, which means that a mare’s negative traits can have very adverse effects. For example, if a mare has an abnormal hock, if she’s too small or if her conformation is insufficient, these faults can have major consequences for her prospective breeding stallion son. Because the breeding industry has become very international and uses approved stallions from all over Europe, the differences between the studbooks have become smaller. To remain a leader in the industry, the KWPN mainly distinguishes itself by breeding only the best mares and using stallions about which a lot is known, and which are out of quality mares. Given that 70 points minimum are required to earn the ster predicate, a dam who has earned this score is considered correct. If a dam scores 65 points or fewer, we may not want her son in our breeding program. These lower-scoring mares are inspected and their traits — including conformation, height and any abnormalities — are recorded. The mares are also evaluated on hard ground in the walk and trot, and if possible, at liberty. If, for example, the mare has very dissimilar feet and her son has slightly dissimilar feet, such a fault is a concern and is evaluated by the stallion selection committee. In addition, photos of the mare are requested from the period in which she competed in the sport or participated in an inspection, if applicable. A mare may change significantly over time, and her appearance in later years may paint a distorted picture of her inherent conformation. For this reason, we will indicate that an older mare with a very dropped top-line was evaluated at age 21, for example.