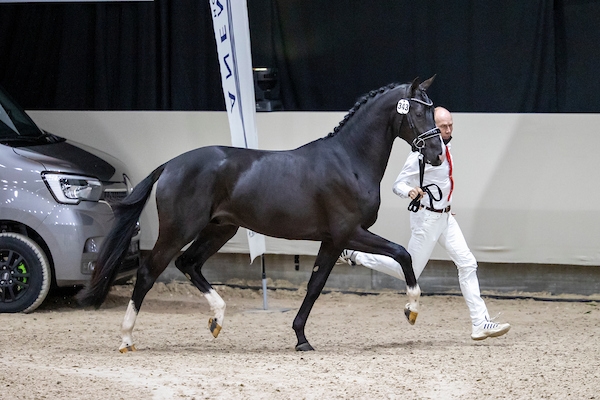 Wow, what a fantastic premium round in which we got to enjoy four fantastic movers. Four stallions by the sires All At Once (2), Vivaldi and Escamillo were honoured for their performances. Three of them are bred by Stal 104, who clearly dominated the dressage side of this KWPN Stallion Selection.

For Willeke Bos of Stal 104, the 2022 stallion selection was a big success already as she got five stallions appointed to the performance test. Three of them even got to return for the premium round dressage stallions, offered to you by Hippo Horse Insurance. Among them One-Two-Three (Vivaldi out of Tolivia elite sport-dres pref prest PROK by D-Day), a full brother of the KWPN-recognised Small Tour stallion Vitalis. “This is an elegant, longlined stallion that moves with abundant suppleness, balance and lightfooted-ness”, explains Bert Rutten. In the premium round Stal 104 also presented two sons of their Olympic stallion All At Once. Opoque (out of Ice Princess STH elite IBOP-dres sport-dres PROK D-OC by Davino V.O.D.) was bred out by Stal 104 out of an exceptionally well-tested mare (IBOP 90.5 points) and is now in hands of Andreas Helgstrand. “This stallion has a valuable pedigree and moves with an athletic use of his body and lots of ability to regulate his stride.” The second All At Once-son in this group is the beautiful Otazu (out of Small Tour mare Atilinda M elite IBOP-dres sport-dres pref prest D-OC by Negro) of breeder Stal 104, that is therefore bred out of the same dam as the remarkable KWPN-approved stallion Jameson RS2 (s.Blue Hors Zack). “Again, a stallion with a high breeding value. He combines an appealing conformation to lots of suppleness and ability to collect and extend in movement.”

The alluring, freshly declared premium stallion Omar Sharif (Escamillo out of Khloe Platinum elite IBOP-dres sport-dres PROK by Ferguson, of breeder Rom Vermunt and co-registered to Stal Brinkman of Twello) comes out of the full sister of the winner of WC bronze in the five-year-old class last year, Lightning RR. “This is a chic, youthful stallion that stands out thanks to his enormous elasticity and great body use in movement”, said Rutten. The breeders each received a cheque of 1.000 euro, offered by Ralph van Venrooij on behalf of the ‘Friends of the KWPN’.

Read all about the stallion selection in the next edition of the KWPN Magazine.