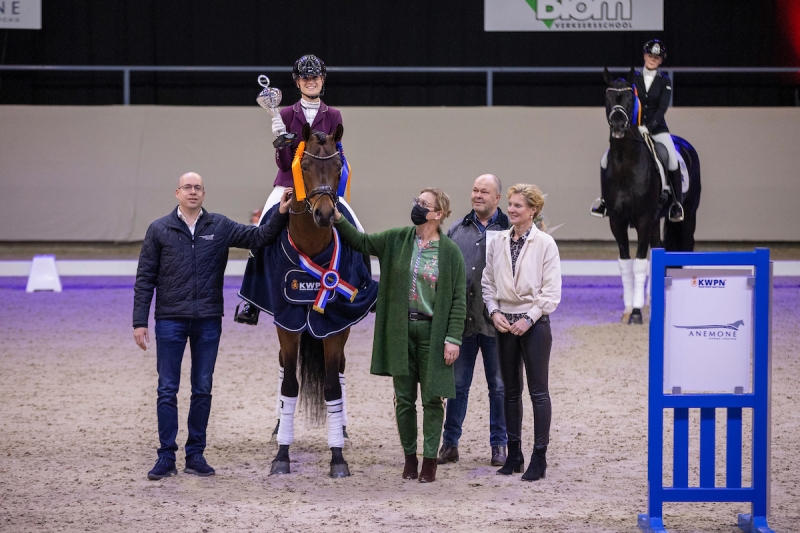 The Anemone Horse Trucks Stallion Competition Dressage had a clear winner today. After McLaren (s.Morricone) already won three legs with Dinja van Liere, he secured both the day prize and the overall win in the final today.

Bart Bax, Mariette Sanders and Monique Peutz judged the Anemone Horse Trucks Stallion Competition Dressage final. The jury could award the highest marks to McLaren (Morricone out of Samantha by Sir Donnerhall, bred by U. Toenjes of Ganderkesee). The alluring stallion already won the selection competitions in Kronenberg, Ermelo and Exloo and was well in the lead. In the final he showed a very consistent performance. He is a beautiful, elegant appearance. Dinja presented him in a lovely manner. It is such a charming stallion with so much potential for the future.”

Dinja van Liere also obtained the second place in the competition, now aboard the pitch-black Mauro Turfhorst (Zonik out of Hidaylia ster by Negro, bred by Jan Greve of Haaksbergen). In Kronenberg the stallion scored 88 points, in Ermelo and Exloo 85 points. “We think he is such a lovely appearance in the ring: so light-footed and with great self-carriage”, tells Monique Peutz.

Maddox Mart (Hennessy out of Fanirma elite IBOP-dres PROK by Bordeaux, bred by C.W. van Baalen of Gelicum) claimed the third position in the overall rankings with Jessica Lynn Thomas. “This is an impressive stallion, with lots of ability, strength and power. Especially in the canter, the hind leg keeps on coming”, compliments Monique Peutz.

The final of the L-class formed some great advertisement for Eugene Reesink. He is the owner of the winner McLaren and co-owner of Mauro Turfhorst, the runner-up. The latter he owns together with Turfhorst Stud.