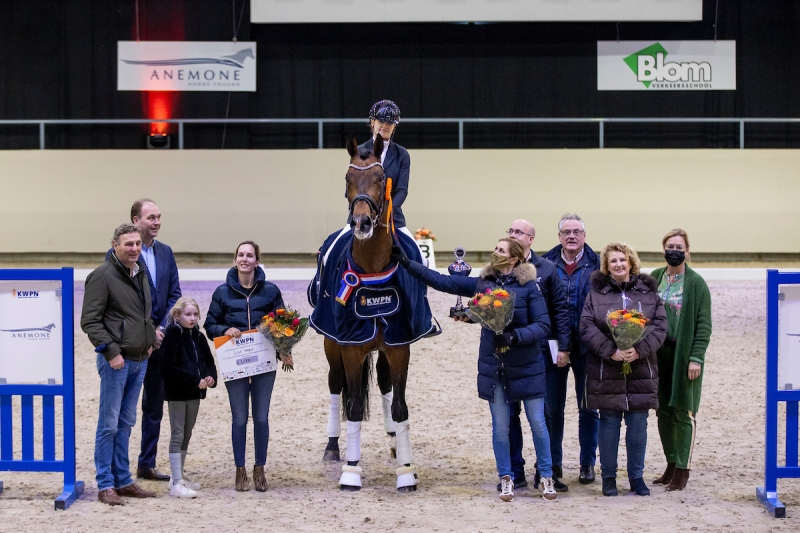 The six-year-old Las Vegas (s.Ferdaux) entered the M-class final of the Anemone Horse Trucks Stallion Competition Dressage with a lead of 20 points. Ridden by Franka Loos, the impressive stallion performed a clean sweep and won both the final and day prize.

Las Vegas (Ferdaux out of Dalia Deline ster keur PROK by Wynton) is bred by J. Deenen of Heijen. Monique Peutz comments on behalf of the jury: “The stallion stands out for his strength, power and energy. He truly pushes off the ground and is clearly pleasant to work with.” In the day prize, the stallion scored 89 points, bringing the overall score in this competition to 368 points.

Scoring 347 points in the competition and 88 points in the final, the second place was for Lowlands (Millenium out of La Donn S by Donnerball, bred by B. Schrapper of Groenheim). Dinja van Liere presented the black stallion in a pleasant way. “This stallion shows an elegant frame in the test. The walk is pure and spacious. The trot is light-footed. In the canter he has good rhythm and jump”, according to Monique Peutz.

Jill Bomers could line up as third with Lennox U.S. (Grand Galaxy Win out of Herarona elite IBOP-dres D-OC by Rousseau, bred by Bas Wilschut of Bosschenhoofd). “A charming combination and an elegant image. The stallion is very obedient and focused on his rider. The submission is lovely, they received 95 points for it.” In total, Lennos U.S. scored 87 points in the final and 336 points in the entire competition.