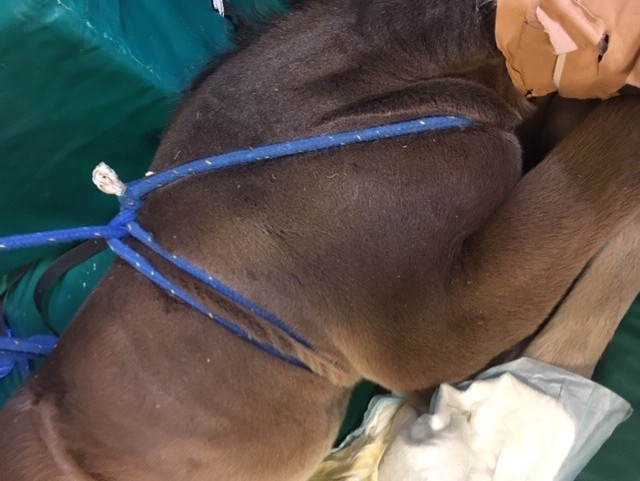 What a joy to see the frolicking foals in the pastures. Unfortunately, not every foal is off to a healthy start. A newborn foal may not respond normally, have a weak or a lack of suckling response. They often stand still in a corner or wander round the stables aimlessly and fail to locate the dam’s udder: the so-called dummy foals that get their name from appearing dumb.

This condition is seen in 1 to 2 percent of the newborn foals. Internist for Horses Esther Siegers of University Clinic Horse explains: “A healthy foal is within 1 to 2 hours on his own feet and will then directly search for the udder of the dam to nurse. If that does not happen, this may be a case of a dummy foal. The symptoms displayed by a dummy foal may have two causes: oxygen deprivation during the pregnancy or birth or the absence of a certain hormone change.”

In case of the second cause, rebirth may work well. Esther explains: “During the pregnancy, foals are kept in a sleeping state by a certain hormone. This prevents them from moving too much around the womb and causing harm to the mare. During normal parturition, the hormonal composition changes – probably because of the pressure of passing through the pelvic canal – which wakes up the foal, so it will stand up and try to drink. In case of a quick birth or Cesarean section there may have been too little pressure and the change in hormones may be absent, as a result the foal may remain in a quiescent state. The past few years, the phenomenon rebirth and foal squeezing has been researched and found beneficial in these cases. It is a special technique using a simple rope harnass to mimick the pressure experienced during normal parturition. It is not effective in all foals, but for some it works very well. The foal appears to fall asleep, as if it’s in the mare again. Then it wakes up and the pressure is released. If all goes well, the foal will stand up to nurse. It has a good chance of growing up normally and healthy.”

Do you have a dummy foal? Do not experiment yourself but consult your vet. It is important to ensure the foal has no underlying conditions before the squeeze technique is used.

Are you or do you know someone that is breeding a foal for the first time? This Happy Foal Package is an absolute must-have in this exciting time! We furthermore gathered useful tips, most frequently asked questions and information about breeding and registering your foal(s). Would you like to enjoy the foals of other breeders or show your own bred foal(s) to them? Join the special Facebook group for KWPN Foals!