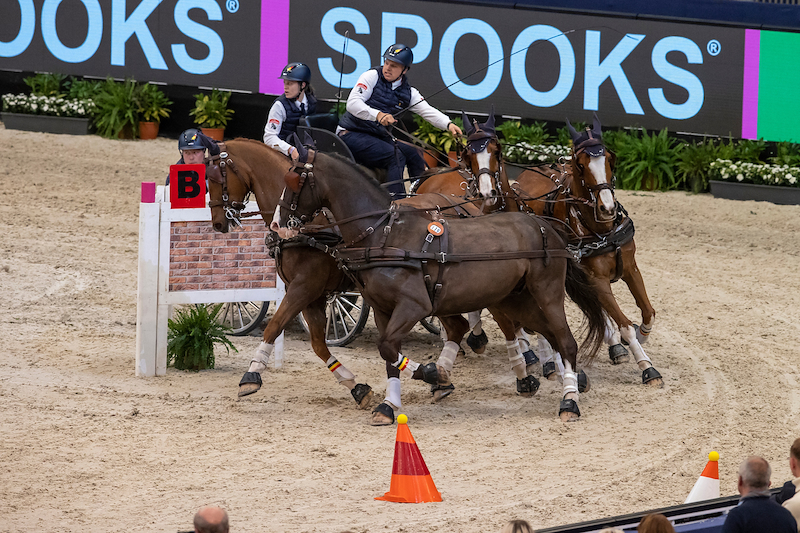 The driving sport is always a guarantee for spectacle and today, in the vibrant arena in Leipzig, was no exception. On Friday Bram Chardon grabbed the lead, to then see his advantage go up in smoke in the first round today. The drive-off unfolded in a dramatic way, eventually celebrating the Dutch rider as the winner. The Belgian Glenn Geerts showed an impressive drive that secured the third position for him and his team, that included the two KWPN-horses Erdball (s.Uniek) and Zeron (s.Nando).

At 27 years of age, Dries Degrieck was the youngest driver this final. It is furthermore his first season at this level, but this weekend he showed he is a force to be reckoned with. The Belgian rider is trained by Boyd Exell and his team was exclusively comprised of KWPN-horses. Kane B (Delviro HBC out of Bellissima ster s.Selleen, bred by A.J.P.M. Bakx of Liempde), Hunter (Unieko out of Sirose keur pref v.Majesteit, bred by L.J. Altena of Coevorden), Frederik-Jane (Victory out of Osinda-Jane ster pref s.Waterman, bred by H. Van Malestein of Voorthuizen) and Dageraad (Waldemar out of Veldrose ster s.Manno, bred by J. Brouwer of Enschede) formed an exquisite team. Degrieck presented a team of fresh, fit, and agile horses. Friday, they took the third spot and a podium place seemed well within reach. Unfortunately, a bal was dropped in the last line, demoting the combination to the fourth position.

After the first round on Friday, Glenn Geerts was ranked fourth. Today, he drove to a top-three placement through a spectacular test in the second final and thereby secured a spot in the drive-off. The Belgian driver took some risks in the basis round today and opted for an unexpected turn, causing an official to be quick on her feet as well. Geerts’ guts paid off, his four chestnuts crossed the finish line in a timely manner and without incurring any penalties. The third place meant a drive-off, this round was not a flawless one but could not have bothered the driver as a podium place was now secured. Glenn Geerts put the same horses in front of his carriage as Friday, among them were the second-round viewing Unieko-offspring Erdball (out of Sastrona ster pref s.Jonker, bred by G.W. Zuidema-van Dam of Lierderholthuis) and Zeron (Nando out of Peronica ster s.Droomwals, bred by A.E. Haarman of Heeten).

The World Cup Finals can be watched via ClipMyHorse/FEI.tv. At 14.45hrs the final jumping starts.