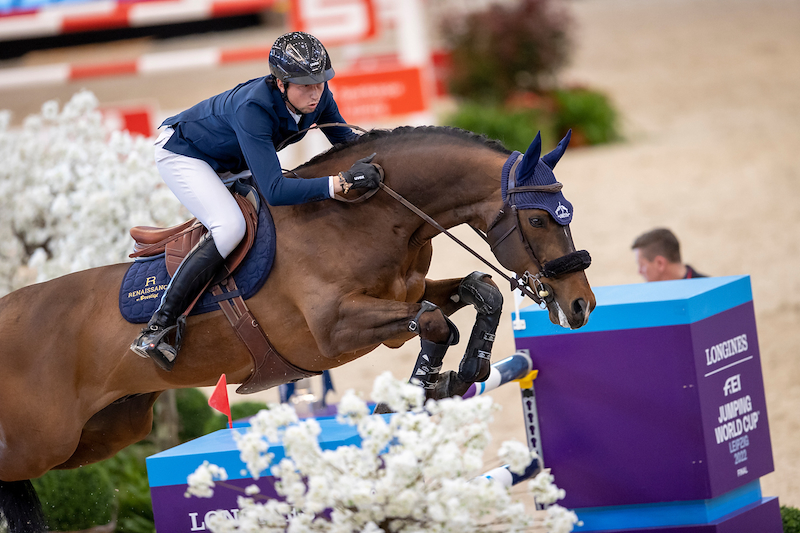 Martin Fuchs and Chaplin were certainly among the tipped favourites prior to this weekend in Leipzig and underlined that position after their win in the first round on Friday. The Swiss rider entered today’s final with 5 penalties after his second round with The Sinner and therefore could not afford any mistakes today. The KWPN-recognized stallion did not disappoint and added the victory in the world cup final to his long list of achievements!

What a winner’s mentality Chaplin (Verdi Tn uit Jaltha B elite sport-spr prest van Concorde, fokker G. Knoop uit Slootdorp) showed once again today. Martin Fuchs exclaimed nothing but praise for his stallion. “Chaplin is the horse that has my heart. What a fighter, I am so happy and proud of this title.” And rightfully so, because it quickly became apparent that course designer Frank Rothenberger had not built a simple course today. Multiple top combinations incurred jumping and time penalties. Nevertheless, a few riders kept the slates clean, making the last round a thrilling conclusion. The Swiss rider kept a cool head and again steered his Verdi-son through a flawless round. Loud cheering followed from the crowd as a podium place was now secured. The biggest competitors, being Harrie Smolders and Monaco (s.Cassini II) and McLain Ward could not repeat this feat. The victory went to Switzerland and his eager Chaplin, the Dutchman grabbed the silver.

The KWPN-recognized stallion Cristello (Numero Uno out of Volstelle keur pref prest sport-spr byVoltaire, bred by W.F.J. Wigink-Markvoort of Schalkhaar) and Denis Lynch incurred two jumping errors in the first round today, but took their revanche by clearing the course the second time around. It resulted in the fifteenth position for the Irish rider and bay stallion. The American Katherine A. Dinan and Brego R’N B (Namelus R out of Nikita prestatie v.Gerlinus, bred by L.H. and H. Mulder-Buiten of Stuifzand) placed eightht in the second round on Saturday, but could not claim a top placement today. The combination eventually finished in 21st place.