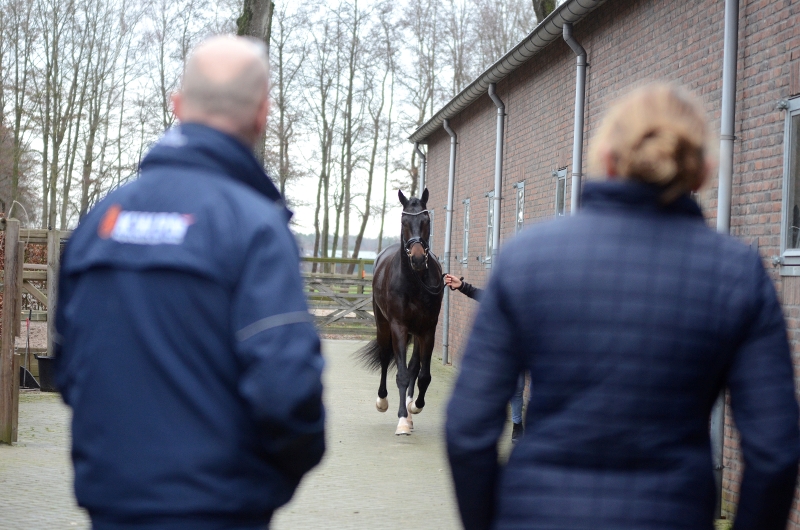 Today, nine dressage stallions, eleven three-year-old jumper stallions and both Gelder stallions have started their 35-day-test in Ermelo. They were presented by their own rider today and found trainable by the committee.

The stallion selection committees gathered today in Ermelo to assess the three- and four-year-old stallions ridden by their own rider. For the four-year-olds it was a saddle presentation, the committees have conveyed their findings to the owners, and it is up to them to deliver them for the 21-day-test on May 9th.

The three-year-old stallions that were deemed trainable and were accepted by the vet, moved into a stable at the KWPN centre. “In general, the rideability of the jumper stallions was good, they made a few jumps out of trot. From now on, they are evaluated by the stallion selection committee every Tuesday”, tells Henk Dirksen as senior inspector. “The four-year-olds were also presented by their own rider and the stallion selection committee went over their findings and possible recommendation with their owners.”

Among the dressage stallions, nine three-year-olds got the green light to start their 35-day-test. “Since the KNHS halls were unavailable, we scheduled 20 minutes for each group of two stallions. This allowed the stallions to have a relaxed ten-minute warm-up before they were assessed by the stallion selection committee. Because this now took place in the same arena, they already had gotten used to their surroundings and that also improved the rideability of the stallions. It was a positive start of the performance test and we expect the four-year-olds back in two weeks”, explains senior inspector Floor Droge. Both Gelder stallions also showed themselves well and have begun their performance test.

Overview of the participating 3-year-old stallions.
The following stallions did not start their test: O.K. Macoemba (s.Arezzo VDL), this is possible at a later time, Odysseus of Invictus (s.Quabri de l’Isle) and O’Champ (s.Just Wimphof)