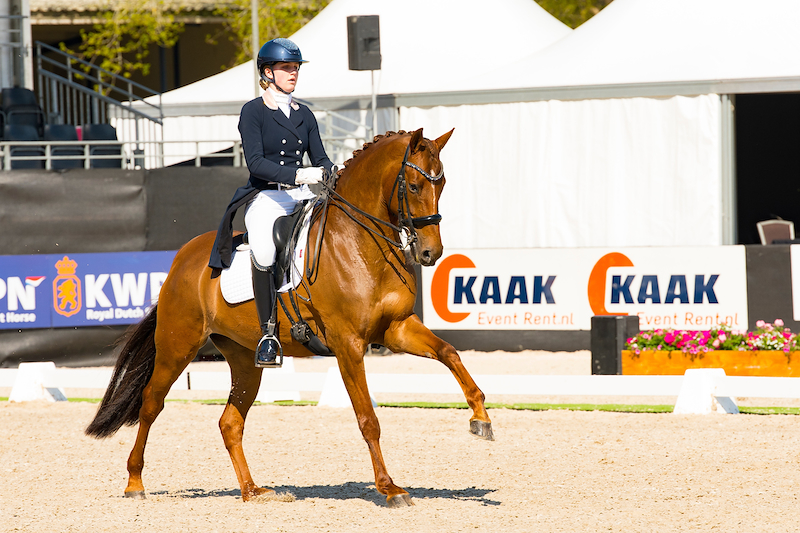 The National Championships for Junior Riders just came to an end. The gold was won by Lara van Nek and Fariska (s.Vivaldi). The silver went to the KWPN-approved stallion Lennox U.S. (s.Grand Galaxy Win) with Jill Bogers. The third step on the podium was taken by Rowena Weggelaar aboard Klieveer’s Don Quichot (s.United).

Lara van Nek has gathered a significant list of achievements with her Fariska (Vivaldi out of Variska ster pref prest s.Nourejev, bred by A. Dijkstra), but a golden medal at the Dutch Nationals was not on it yet. The Freestyle to Music resulted not only in a personal best for the pair, but also secured the day prize and the overall championships.

The merely six years of age Lennox U.S. showed to be a good match for the seasoned horses that made their appearance today. Jill Bogers guided her elegant KWPN-approved stallion (Grand Galaxy Win T out of Herarona elite D-OC IBOP-dr s.Rousseau, bred by B. Wilschut) to 75.083% in the freestyle and thereby placed third, repeating their feat of the first leg on Thursday. Their overall score translated to the silver medal. An impressive accomplishment of the pair that shows abundant potential.