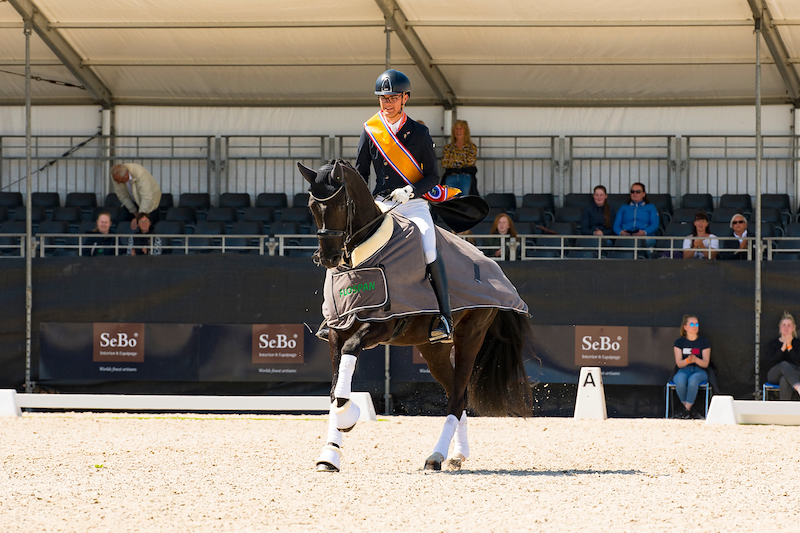 The final of the Young Riders ruffled the deck that was laid down in the first leg on Thursday. Except for the one at the leading position: Marten Luiten and Killer proved invicible today and secured the well-deserved gold.

In pure harmony, Luiten led his black gelding through the test and the pair excelled in the half-passes. A whopping 76.217% appeared on the scoreboard. The jury had unanimously placed Marten Luiten and Killer (George Clooney out of Zudelga stb prest s.Tolando, bred by H. van Houtum) at the number one rank. As this was the starting position after the first manche on day one, it took few calculations to draw up the final rankings. The golden medal was secured by the two young super talents, which also meant the rider prolonged his title. Moreover, Luiten and Killer are still in the race for a prestigious ticket to the WC for Young Dressage Horses in Ermelo. Today, they showed a big championship fits them like a glove. Despite that outcome, a combination we may undoubtedly expect to hear more from in the future.

Brandy Bos took her sporty revenge today after the seventh position with Florett W (Jazz out of Arina elite PROK IBOP-dr pref prest s.Sandro Hit, bred by W. Wijnen) in the first manche. In the freestyle to music the pair scored 74,867%, claiming the second place for the day prize and this score allowed them to climb the rankings all up to silver.

Shanna Baars and Farzana G (Ampère out of Ashanti G s.Florencio, bred by M.G.M. Gerner) placed fifth in today’s final and thereby ended on the third step of the podium in the championships. Another medal for the elite mare that must by now have filled a trophy cabinet like no other.