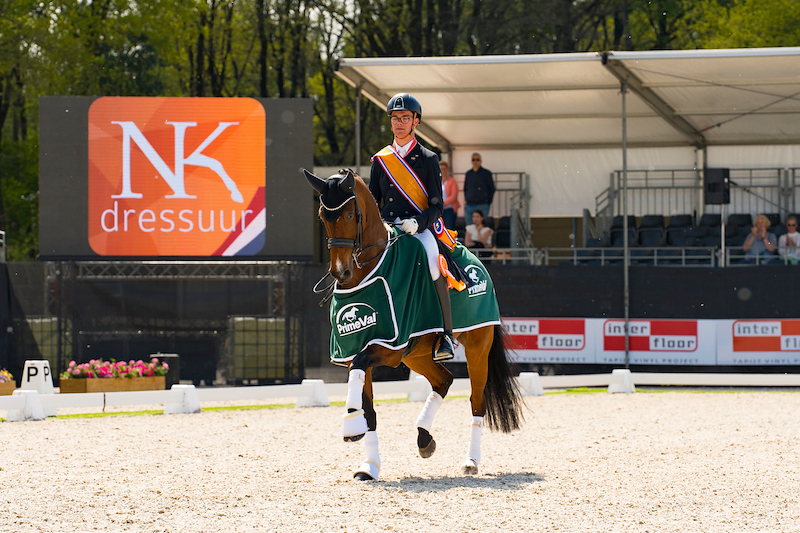 Earlier today, Marten Luiten claimed the Young Riders championships, thereby prolonging the title he won last year with Fynona (s.Ampère). This edition, he entered this mare in the U25 Grand Prix class, a significant move upwards. They proved to be ready as they once again danced to gold at the Dutch National Championships.

Marten Luiten and Fynona competed in the Small Tour last year, but recently they promoted to the Grand Prix. And not without success, as their winning score of 77.620% in the freestyle for music showed. A golden combination, Luiten and Fynona (elite D-OC IBOP-dr sport-dr pref s.Ampère out of Wynona RB elite D-OC IBOP-dr sport-dr pref prest s.Gribaldo). The mare was bred by Stal 104 and this meant that owner Willeke Bos is going home with two gold medals as earlier today her daughter Lara van Nek mounted the top step of the podium for Junior Riders.

EC U25 is calling

Yesterday’s top three repeated their placement in the finals and therefore also held onto it in the championships. Jessica Poelman saw her test with Chocolate Cookie RDP (Johnson out of Noblesse ster PROK prest s.Livingstone, bred by K. Retera) be rewarded with 76.825% as this translated to silver. The bronze went to Thalia Rockx in the saddle of Verdi de la Fazenda (Florett AS out of Piroshka de la Fazenda ster IBOP-dr PROK prest s.Sandro Hit, bred by Fazenda Stud). Should this podium also form the delegation to the EC U25 later this year, a team medal could be well within reach.