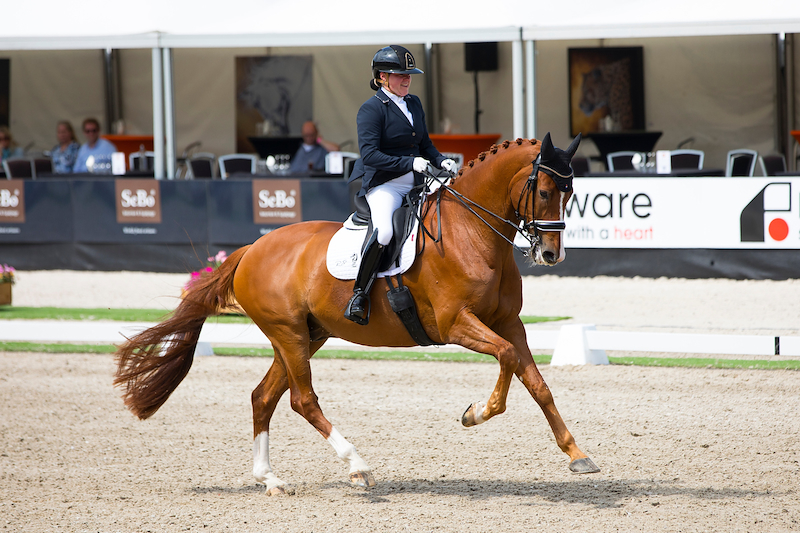 The final of the Para Dressage class was just won by Sanne Voets and Demantur RS2 N.O.P. (s.Vivaldi). The duo thereby repeated their feat of the first day and secured the gold for the fourth time in a row. The silver was taken by Alphaville N.O.P. and Frank Hosmar, while Maud de Reu claimed the bronze on Webron N.O.P.

Sanne Voets and Demantur RS2 N.O.P. (Vivaldi out of Kaylee keur sport-dr prest s.Elcaro, fokker G.C.J. Reuzenaar) earned 78,615% for their Freestyle which won them both the dayprize and the championship. Sanne Voets was delighted with her gold medal: “Demantur is truly a horse that makes you happy and I am very grateful for him. When you have such an enjoyable ride at a big event like this, things come full circle.”

Frank Hosmar guided his Alphaville N.O.P. (studbook name Aram, s.Sandreo out of Marcia keur s.Iglesias, breeder A. Hendriks) to 78,325% and grabbed silver. The bronze medal went to Maud de Reu and Webron N.O.P. (Sir Sinclair out of Liane elite prok sport-dr prest s.Landwind, bred by J. Seebregts & E.J. Schuyers). It therefore turned out to be an entire N.O.P. podium, the abbreviation refers to the Dutch Olympic Horse Foundation that aims to keep top performance horses in the Olympic disciplines within the Dutch borders for national riders to campaign at large championships.

Currently, we are watching the first leg of the Big Tour championship. This, and all other classes, are broadcasted live on ClipMyHorse.tv.