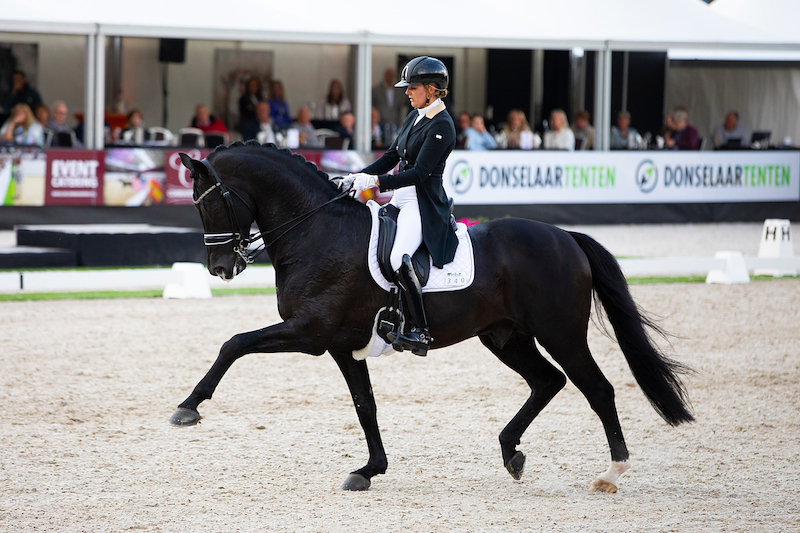 The third day of the National Dutch Championships in Ermelo was concluded with the first leg of the Big Tour class. The KWPN-stallions immediately made a statement: Desperado N.O.P. (s.Vivaldi) won, Hèrmes (s.Easy Game) came in second and Indian Rock (s.Apache) claimed third prize.

Hèrmes (Easy Game uit Bukkie keur EPTM-dr pref prest, breeder G. Gijsbers) showed his potential once again (77.956%) and there was plenty left to improve. Dinja van Liere incurred some errors in these surroundings, however, if the talented stallion keeps his focus tomorrow, Emmelie Scholtens has shall have to bring all she’s got.

The powerhouse Indian Rock (Apache out of Crisjena keur pref IBOP-dr s.Vivaldi, breeder J. de Bruijn) is an impressive appearance in the ring. Despite having very little experience at Grand Prix-level with Emmelie Scholtens, he immediately bolted to the third position in the first test. Moreover, by obtaining 76,500% he already created quite a gap towards the number four position and that means Emmelie is faced with a difficult choice now: campaign Desperado N.O.P or Indian Rock in the freestyle? According to the regulations each rider can present one horse maximum in the final, the other horse is invited to compete in the small final.

The best twelve combinations may get ready for the prestigious final on Sunday. Fleau de Baian (Jazz out of Fidora ster pref prest s.Ulft, bred by Family Beyer) is starting from the sixth position (73,630%) in the intermediate rankings with Adelinde Cornelissen.

All classes are broadcasted live on ClipMyHorse.tv.