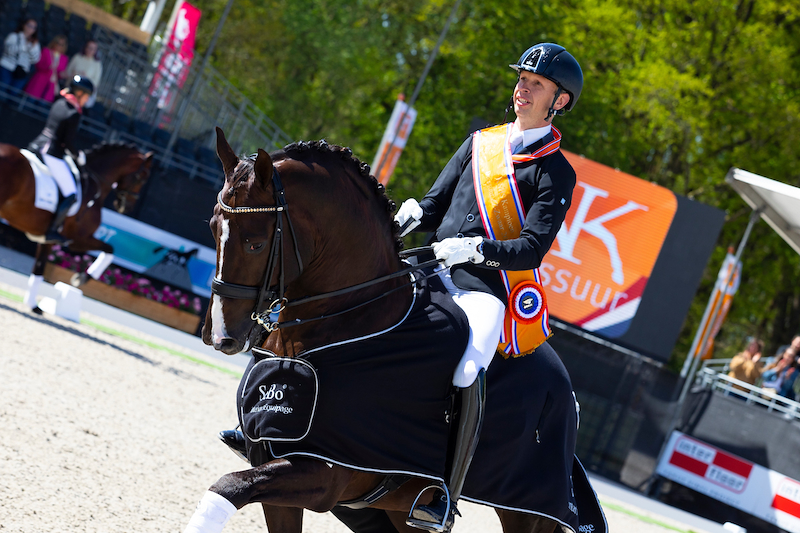 After a win in the first leg, the dayprize also fell prey to Bart Veeze and KWPN-stallion Kyton (s.Ferguson). And that meant the pair were undeniable in their quest for gold. The silver medal was claimed by Mariek van der Putten aboard Kuvasz RS2 (s.Glamourdale), just ahead of Renate van Uytert-van Vliet that steered the second KWPN-stallion to the podium: Johnny Depp (s.Bordeaux).

After the final test of Bart Veeze and Kyton (Ferguson out of Wilbria keur IBOP-dr pref s.Ferro, breeder W.J.J. Goesten) a percentage of 76,858% appeared in the board, adding this up to yesterday’s score it brought the total to 151,24. A total that their competitors could not touch. And that meant the third gold in a row for Kyton and Bart Veeze after the Z2-title last year and the recent ZZ-Licht Indoor championship victory.

Aboard the KWPN-recognized Johnny Depp (Bordeaux out of Wiana ster voorl. keur pref prest s.Jazz, bred by J.A. & B. Naber), Renate van Uytert-Van Vliet was the third to line up in the prizegiving ceremony. The duo entered the final on preliminary bronze after the first leg and held on to this position. And if it were not for the regulations that stipulate a maximum of one horse per rider per final, Renate van Uytert-Van Vliet could have had a go at it with the other Van Uytert-stallion Just Wimphof (De Niro out of Rastede elite PROK IBOP-dr sport-dr pref s.Riccione, breeder C. Rienks-Kramer). Luckily, we get to enjoy that stallion for another ride in the small final this afternoon.

Marieke van der Putten also clamped on to her second position in the intermediate standings and converted it to the silver medal. For this championship, she saddled the at AES and Westfalen approved stallion Kuvasz RS2 (studbook name Kanjer DDH RS2, s.Glamourdale out of Dyor de Hus elite PROK IBOP-dr pref s.De Niro, bred by Stud Havikerwaard).

Remy Bastings and the KWPN-approved Improver VDT (Apache out of Velvet V.D.T. elite D-OC pref prest s.Ferro, breeder A. Van de Tillaart) concluded their Dutch National Championships with a ninth place in the final and that resulted in the same position in the overall championship.

The last day of the Dutch National Championships Dressage features a full schedule. It includes several small finals, the final Small Tour and the cherry on top, the Big Tour Freestyle to Music Final at 14.30hrs. All classes are broadcasted live via ClipMyHorse.tv