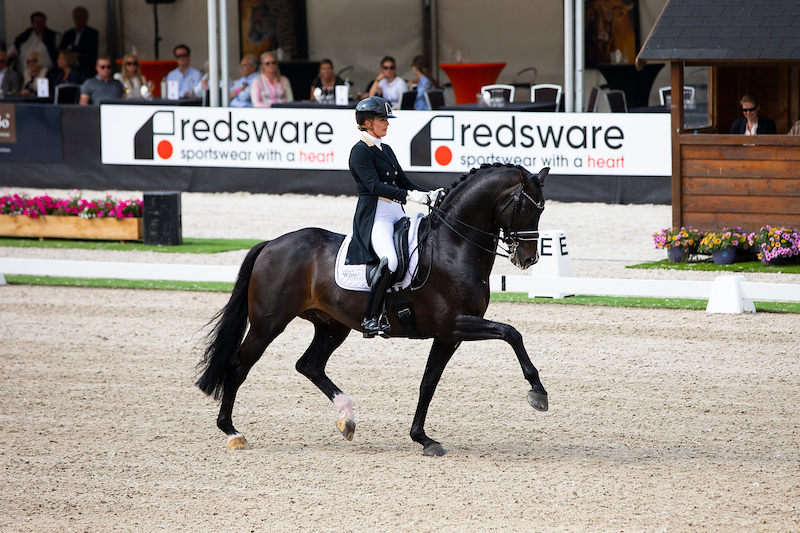 Thanks to the regulations that stipulate a maximum of one horse per rider per final, the small final of the Big Tour turned into quite an interesting class. The KWPN-stallions Indian Rock (s.Apache) and Aqiedo (s.Undigo) shared the first prize. Dinja van Liere followed in third place with Hartsuijker (s.GLOCK’s Johnson TN).

Yesterday, Indian Rock (Apache out of Crisjena keur pref IBOP-dr s.Vivaldi, breeder J. de Bruijn) proved to be a positive surprise. The impressive son of the prematurely deceased top progenitor Apache has little experience at Grand Prix-level, which is not odd given he is aged merely nine years. Making miles is the only solution and an experience at the Dutch National Championships forms an excellent opportunity to do so. Indian Rock obtained some scores this weekend that showed this championship comes in no way too early and there is plenty left in store for this appealing combination.  In the small final, they obtained a score of 75.213%, the exact same percentage as Adelinde Cornelissen and Aqiedo.

Last night, Adelinde Cornelissen claimed twelfth place in the first leg aboard the KWPN-approved Aqiedo (Undigo uit Ranirma keur v.Metall, fokker A.H. van Baalen-Roebers). Today, they propelled to the top as Cornelissen steered the black stallion to a shared first placement. Dinja van Liere was the third rider that earned a spot in the Freestyle with a second horse and chose to enter Hartsuijker (Johnson out of Balinda ster IBOP-dr PROK pref s.Scandic, bred by M. Wolfs van den Berg and I.D. Wolfs) in the small final. The gelding had to leave the top placings to the two stallions and followed in third.

All At Once & Hitmaker

This Big Tour Championships the breeders got to enjoy quite a few approved stallions at Grand Prix-level. All At Once (Ampère out of Wynona RB elite IBOP-dr D-OC sport-dr prest s.Gribaldi, breeder Stal 104) ended up on fifth in the small final with Yessin Rahmouni. And finally, Jennifer Sekreven presented the Wynton-son Hitmaker  (out of Maduna elite D-OC sport-dr prest s.Cabochon, breeder K. Van Zaanen).

Currently, the Big Tour final is in progress. Like all other classes, it is broadcasted live via ClipMyHorse.tv.