NC Big Tour: golden Hermès in league of his own 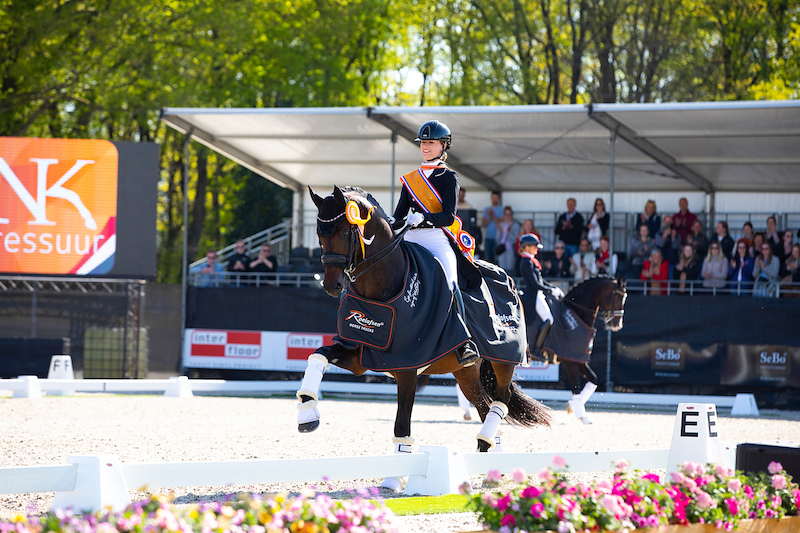 The 2022 Dutch National Championships Dressage came to an end as it just honoured its last champion: the winner of the prestigious Grand Prix championship. Dinja van Liere and the KWPN-stallion Hermès (s.Easy Game) showed to be in a league of their own.

Wow, what a performance of Dinja van Liere and Hermès (Easy Game out of Bukkie keur EPTM-dr pref prest v.Flemmingh, breeder G. Gijsbers). They were the last to enter the ring and treated to the crowded grandstands to a fantastic dessert. The jury clearly enjoyed the spectacle as well and placed the pair with over 83% firmly on top. This brought the total after two legs to over 161 points; creating a significant margin of ten points compared to silver medalist Thamar Zweistra & Hexagon’s Ich Weiss (s.Rubiquil) and Marieke van der Putten & Tørveslettens Titanium RS2 (s.Totilas) that obtained bronze. Dinja van Liere was very proud of her stallion: “Hèrmes was immediately relaxed today. He is able to focus so well, and I am glad that was the case today. Hèrmes obviously excels in the piaffe and passage, those are actually the easiest aspects for me in the test,” grins Dinja.

Adelinde Cornelissen came close to a podium place with Fleau de Baian (Jazz out Fidora ster pref prest s.Ulft, bred by family Beyer). The chestnut stallion is a true eyecatcher in the ring and earned 75,955% for his freestyle today. In hot pursuit was Marlies van Baalen and her Olympic Go Legend (Totilas out of Litchy elite PROK sport-dr prest pref s.Ferro, bred by Stal Wittenberg) on fifth.

Today was supposed to be the ultimate battle between two KWPN-stallions: Hermès and Desperado N.O.P. (Vivaldi out of Sarita elite D-OC pref prest s.Havidoff, bred by family Andeweg). The crowd was eager to watch this clash of the titans, but Emmelie Scholtens had to withdraw her Desperado N.O.P. as he was not fit to compete. Undoubtedly a tough pill to swallow for the rider; not only because a medal seemed a sure thing for the two, but also because it was already too late for Scholtens to switch to her other stallion. Indian Rock (s.Apache), with whom she won the small final this morning, also secured an excellent vantage point for the championship through a third position in the first leg. National Coach Alex van Silfhout: “It is an unfortunate combination of circumstances for Emmelie, because she rode her best test ever with Desperado N.O.P. yesterday.”