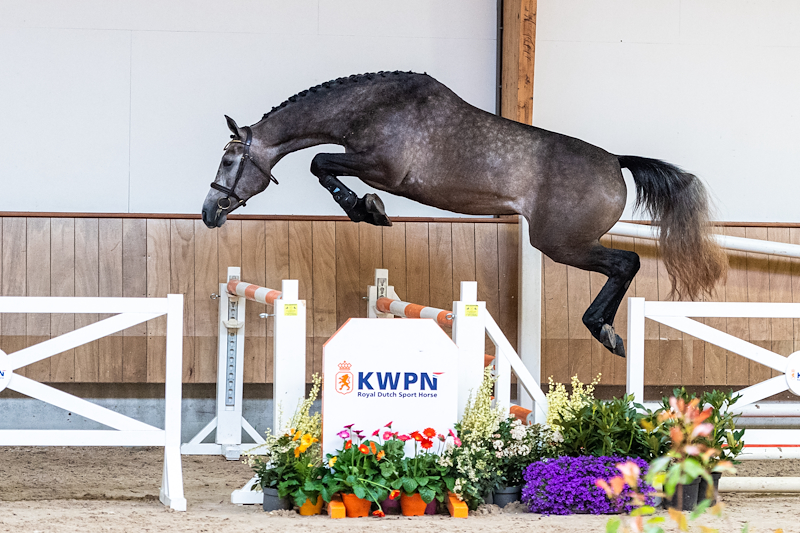 An interesting group of dressage and jumping talents will be auctioned from the 13th to 16th of May in the online KWPN Auctions. The collection consists of three and four year old horses, 14 dressage bred and nine showjumpers. Given their own talents and strong pedigrees, this collection offers a lot of perspective for both the rider and breeder.

The collection of dressage horses includes offspring of stallions such as former world champions D'Avie and Revolution, champion stallion Kremlin MD and Grand Prix stallions like Inclusive, Total US and Dream Boy. Performance genes are also abundantly present on the dam’s side.

Related to successful horses
An eyecatcher is three-year-old Oakwood Tarpania (s.Kremlin MD), who comes out of the well-known Small Tour mare Hollywood Tarpania and is therefore a half-brother of Dutch 3yo champion Dutch Dream (s.Dream Boy), who achieved the highest score in the performance test in Warendorf earlier this year. The four-year-old Nevada Utopia W (s.Total US) has the same granddam as the international Grand Prix dressage stallion Olivi, who has been awarded with the keur predicate by the KWPN, and was thus bred out of a half-sister of the Small Tour mare Halla Utopia. The Dream Boy son Obarto J T is a full brother of the very well tested Small Tour horse Jartoga J.T. (IBOP 87.5 points) and half-brother of the Small Tour horses Hartog (s.Apache) and Ichiban (s.Apache). Officer (s.Deparon US) also comes out of the same dam as a Small Tour horse, Fantasy (s.Lord Leatherdale), and his dam is a full sister of the international Grand Prix horse Dutchman (s.Jazz). The three-year-old Oblige (s.Fürst Toto) was bred from a half-sister of the ZZ-Zwaar (fifth level) dressage horses Cheval (s.Krack C), Handsome (s.Apache) and Isis (s.Apache).

More information
The collection can now be found at www.kwpn.auction. After registering on our website, biddings are possible from Friday the 13th of May until Monday the 16th of May. On the last day, the biddings will close from 8PM CET. We are happy to provide you with more information about the collection. In addition, our sponsor Horses2Fly, can take care of the transport of your horse and Hippo Horse Insurance can insure your purchase directly. For any questions you can contact the KWPN via salespromotion@kwpn.nl or +31(0)341-255 511.