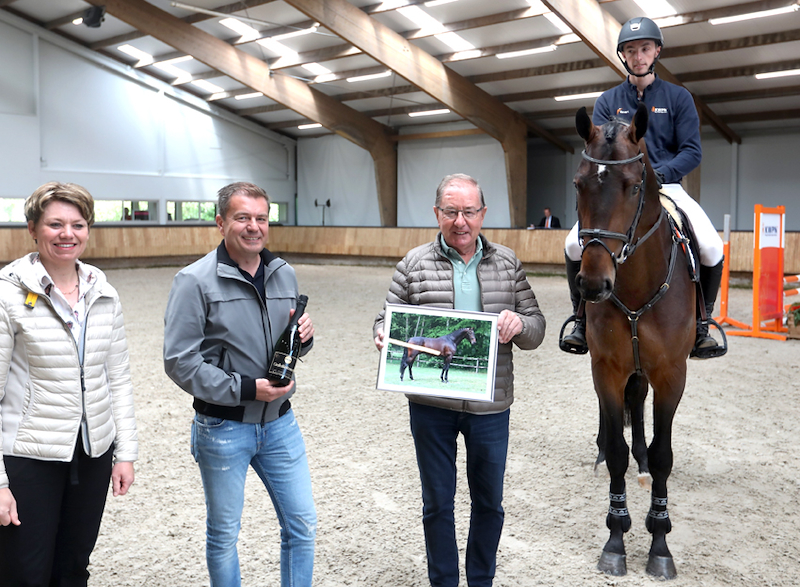 Nine three-year-olds, three four-year-olds and one six-year-old jumper stallion have just received their breeding license in Ermelo. Eleven of twelve newly KWPN-approved stallions made their appearance in the final presentation this morning, the twelfth was found not fit to partake on the concluding day but had passed all prior official assessments with flying colours. This Conthargos-son Orleans VDL (out of Happy Days Z by Heartbreaker, breeder John Thijs of Opoeteren) of VDL Stud received 82 points in total, making him one of the seven stallions with a 80+ score.

The three-year-old Oslo (Côte de Zélande Delta Mossel Z out of Kelvira elite IBOP-spr D-OC s.Chaman) of breeder M. van Heel and co-registered to Joop van Uytert, passed with nines for reflexes and technique, adding to a 84,5 point total. Both the Conthargos-son Orleans, that was bred out of the full sister of Olympic stallion Hardrock Z, and the in the KWPN Select Sale auctioned Outlaw (Manchester van ‘t Paradijs out of Zwinulana sport-spr Phin Phin, breeder J.H. Lambers of Emmen) of RS Showjumping and Denis Lynch, were awarded 82 points. Approved with precisely 80 points are Ocala Z.G. (Cornet Obolensky out of Elanoir ZG by Diamant de Semilly, breeder W.M.M. Zegers of Reek) of Stal Hendrix and Peter Francken, Ovinio (Ipsthar out of Kovinia by Vigo d’Arsouilles) of breeder Geert Moerings and the six-year-old, via the Blom Cup appointed Four Seasons (For Pleasure out of C-Flower Z by Cassini II, breeder E.A.C. BV of Weert) of Kees van den Oetelaar, Roelof Bril and Team Nijhof.

At 13.00hrs the final presentation of the dressage stallions begins. All full reports shall be published online later this day.