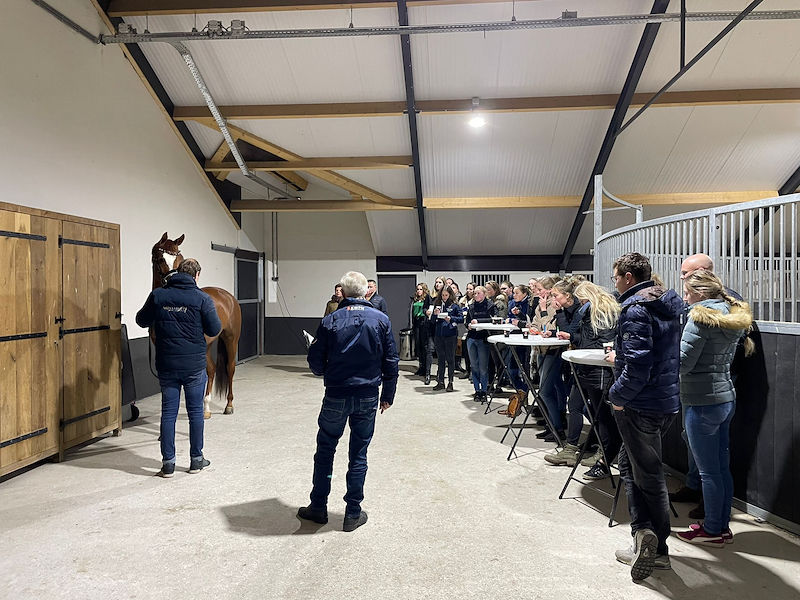 Next month, the WC Young Breeders kicks off at the National Equestrian Centre in Ermelo. The KWPN is represented by a Junior and Senior team, both consisting of JongKWPN-members. So, what is asked of the young breeders at such a championship? Arie Hamoen tells us more.

Every year, the JongKWPN organizes a Young Breeders course for her members in which all championships elements are treated, and it is concluded by a National Championship. The young breeders are divided over two age categories: the Juniors (15-19 years) and the Seniors (20-25 years). Every other year, the NC is not the destination but rather a springboard to the World Championship. The four best participants are selected to partake in the international championship. Saturday, the 23rd of April, the day had come for the JongKWPN-members. The winner among the Juniors was Niel Remijn and he was therefore the first name that was selected for the WC. The Junior team furthermore comprised of Saffira Hartemink, Nikkie Klaaskate and Celine Oosterom. In the second age category it was Eline Pouw who got bestowed the sash and she form the Senior team together with Nikki Jantzen, Vera Bos, and Jeanine Schoondermark. All participants may compete on an individual basis, and the best three results count toward the studbook championship. The young breeders are tested on four elements: theory, judging conformation, judging free jumping and free movement, and presenting a horse in hand.

Inspector Arie Hamoen provides the guidance and support of the young breeders this year. The course started in January via an online meeting. “We kicked the series of with linear scoring. By doing so, we hope to educate the young breeders on how to look at a horse”, explains Hamoen. “Several weeks later we had a meeting at the KWPN centre where we showed and evaluated various videos from KWPN.tv. We watched footage from the stallion show and mare inspections and as a group we discussed the results, and which marks the horse would earn. During a training at Marcel and Tamara van Maanen of MT Stables, we again studied conformation and assessing movements, as well as presenting a horse in hand. Then the National Championships followed at Stal van der Peijl, where Alexandra and Scarlett gave us the last tips and tricks on presenting and then the teams were selected.”

For the teams, the courses have not come an end after the NC. In order to make a good impression at the WC, a few training sessions to make the last preparations are to follow. Naturally, Arie Hamoen will supervise those gatherings as well. “On Thursday, we had the first team training. At the WC they do not follow the linear scoring but use an English protocol that requires you to give a mark of 1-10 for various aspects, that do not entirely align with ours. We discussed the form together to familiarize the contestants with this procedure. We also spend time on showing the horse in hand. We will have a few more training sessions to dot the ‘i’s and hopefully, this is rewarded with some great results.”

Arie Hamoen is enthusiastic about the Young Breeders championship: “This fantastic series of courses is a lot of fun for the young breeders or horse enthusiasts. It is an enjoyable and approachable manner to gain lots of knowledge on how to assess a horse. A unique opportunity even, since where else do they offer this possibility? I can therefore wholeheartedly recommend the young breeders to participate next year.”

For more information or questions, please contact the organisation via regiojongkwpn@kwpn.nl.