The Development of a Foal: Part 1 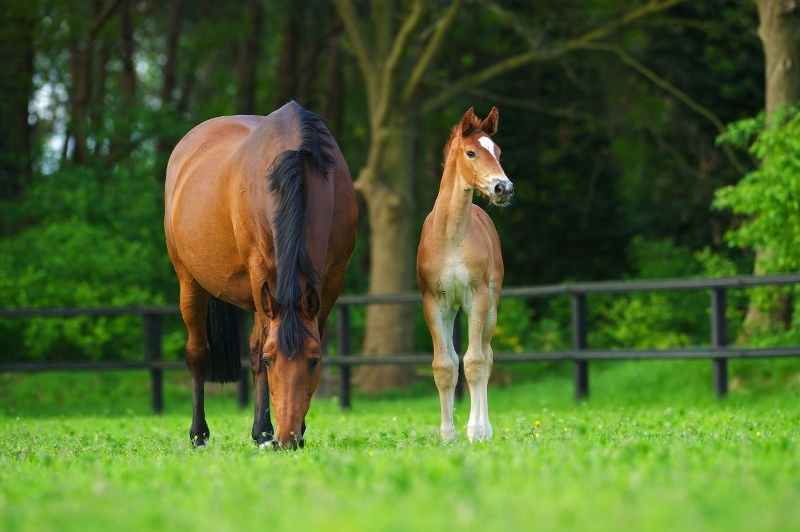 Breeding season is in full swing again. Many mares are pregnant, and breeders are looking forward to the arrival of their foals. Meanwhile, inside each mare a ball of cells is growing, which will ultimately develop into a foal. We will discuss the most important stages of this process.

The development of a foal begins with day zero, the moment of fertilization. Once a mare is fertilized, many cell divisions take place in stages over time. The first occurs after 48 hours, resulting in four to six cells. The second takes place after 72 hours, resulting in eight to ten cells. Between day four and day five, a ‘morula’ is formed, a mass of cells which cannot yet be visibly differentiated.

The following day we see a differentiation of cells between the innermost cell mass and the outermost cell layer, called a blastocyst. Around this time, the blastocyst moves from the fallopian tube to the uterus, which is important to know because the mare may now be flushed for embryo transfer. The following week the number of cells in the blastocyst increases very rapidly. On day 10, we see approximately 45,000 cells with a diameter of 2 to 3 millimeters, increasing to 15 to 20 millimeters on day 14. At this stage, we still have a blastocyst, the inner cells of which will ultimately form the outer layer of the embryonic sac containing the actual embryo. Propelled by squeezes from the uterus, the blastocyst migrates throughout the womb but remains intact thanks to its protective capsule. This migration is critical to the developing embryo. In this way, it contacts all areas of the womb, which is essential for the process of pregnancy recognition. The migration period prevents regression of the corpus luteum (Latin for “yellow body”), an essential hormone-secreting structure which stops the mare from coming into “season” and enables the uterus to support the pregnancy.

First Pregnancy Check
As mentioned, the blastocyst measures only 2 to 3 millimeters on day 10. If we were to ultrasound the mare at this point, the likelihood of visualizing it is only 70%. However, after another four or five days, the blastocyst will have developed into an approximately two-centimeter fluid-filled sphere in which the developing embryo appears as a gray-white mass. Because this fluid-filled sphere is easily visualized with ultrasound, the first pregnancy check usually takes place between day 14 and 16. This time frame is considered optimum because, beginning on day 17, the embryo undergoes the process of “fixation,” attaching to the mucous membrane at the base of one of the two uterine horns. In the event of a twin pregnancy, timely veterinary intervention prior to fixation results in a better outcome. If two amniotic sacs are visible on ultrasound, the veterinarian will attempt to pinch off one. If fixation has not yet occurred, there is less risk of damaging the other amniotic sac.

Next week we will talk more about the further development of a foal.