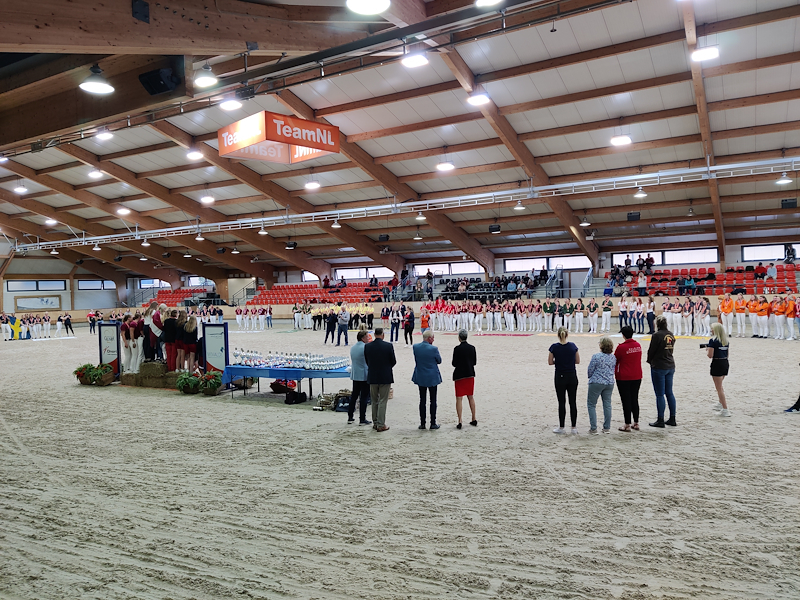 The WBFSH World Championship for International Young Breeders powered by Horses2Fly has come to an end with a sensational conclusion. At the final night, the KWPN showed what their studbook is all about and the young breeders from all over the globe were treated to a vibrant show in which all breeding directions were represented.

After three full days it had finally come to the thrilling denouement on the Saturday night: the division of the prizes. The grandstands emptied as all young breeders stepped on the sand for the award-giving ceremony. The JongKWPN-members secured two prizes on home soil. Amongst the Seniors it was Eline Pouw to take the win in the discipline Judging of Loose Movement and Free Jumping. Junior-participant Nikki Klaaskate obtained the second position in the area Judging of Conformation.

The Irish Sport Horse Studbook got the best result with all their participants and were therefore crowned as overall champion of the studbooks. On Friday, the Irish already shared they were having a lot of fun in Ermelo: “It is great to be here, none of us had actually ever visited the Netherlands before, let alone the National Equestrian Centre. The organisation is fantastic, and the atmosphere is wonderful!” The Irish judge Tiernan Gill was determined prior to the prize giving ceremony: “Of course the ISH is going to win!” and those words came true.

Tomorrow the Young Breeders are offered a chance to visit a typical Dutch stallion owner: VDL Stud. And that marks the end of the weekend and the WBFSH World Championships for International Young Breeders powered by Horses2Fly and the studbooks get to go home and prepare for the next edition in two years.