Further Development of a Foal: Part 2 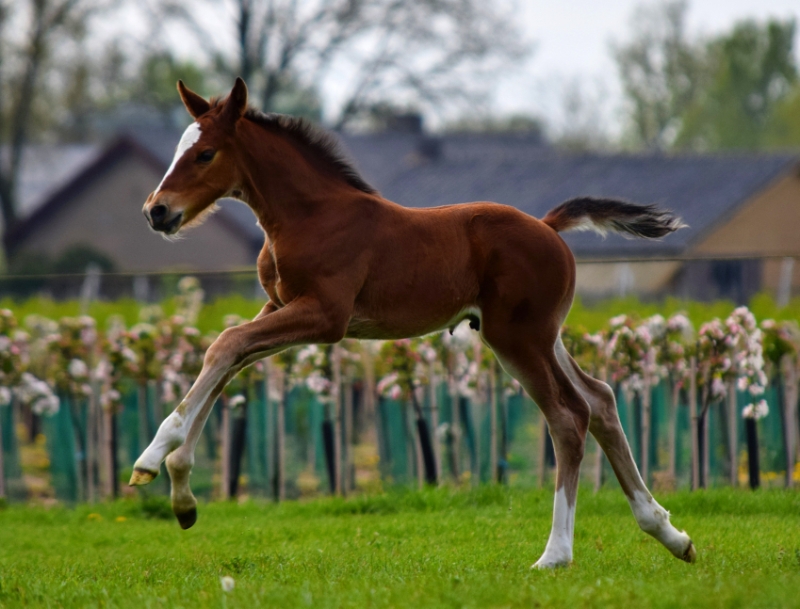 Breeding season is in full swing again. Many mares are pregnant, and breeders are looking forward to the arrival of their foals. Meanwhile, growing inside each mare is a ball of cells which will ultimately develop into a live foal. We will discuss the most important moments in this process.

Around day 17, we see more embryonic development. First, a “neural tube” appears which will eventually form the spinal cord and nervous system. Then blood vessels form at the base of the spinal cord from which the heart develops. Once it is sufficiently developed, a heartbeat can be detected on ultrasound around day 21 to 23. Many veterinarians do a second check on day 30, at which point they can see if the embryo is viable. If a heartbeat cannot be detected, the embryo is likely deceased. Appropriate measures can then be taken to breed the mare again. A living embryo will take on the shape of a tadpole, curled with a convex head and a tail. Later, the tail disappears, and the head becomes more shaped. During this period, the perfect round sac begins to lose its shape and the amnion, the innermost membrane that envelops the embryo, continues to further expand. Around day 37, the umbilical cord is formed within the amnion. To many scientists, this marks the end of the embryonic stage, and the developing foal is now termed a fetus. Although the mare can still lose her fetus, the greatest risk of pregnancy loss has now passed.

Foal in Miniature
A fetus of 40 days old is clearly recognizable as a foal, but in miniature: the head, legs, hooves and body are tiny. At that time, the fetus measures about 5 centimeters. All its organs are present, and they are developing into their final shape. Now that the vital organs have been formed, the fetus’s main task is to grow. During this period, the veterinarian also has an important task: to determine the sex of the fetus by means of a transrectal ultrasound, which can be performed around day 65.

After 90 days, the sex determination becomes more difficult because the fetus is deeper in the mare's belly. Around day 120, however, the fetus is higher again and the sex can be determined with a rectal ultrasound. Between day 150 and 200, the sex of the foetus can be determined with an external ultrasound, through the abdominal wall of the mare and the fetus. This procedure makes it possible to visualize the internal reproductive organs but becomes very difficult to carry out after day 200 when the fetus is even larger.

Next week we will talk more about the further development of a foal.