Development of a Foal: Growing and Growing 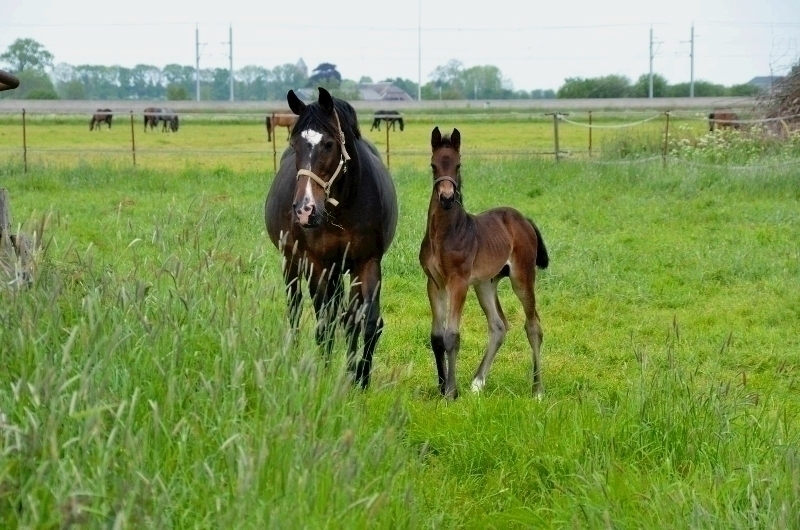 Breeding season is in full swing again. Many mares are pregnant, and breeders are looking forward to the arrival of their foals. Meanwhile, inside each mare a ball of cells is growing which will ultimately develop into a live foal. We will discuss the most important moments in this process.

The fetus will continue to grow in the coming period. On day 100, it is about the size of a kitten; on day 150, the size of a small cat; and on day 180, the size of a small dog. In this period, the fetus lies in random positions, but often on its back. On day 240, the fetus weighs approximately 16 kilos and now too large now to rotate lengthwise in the uterus. As a result, it lies with its head and forelegs facing backwards. In addition, its first hairs begin to grow on the lip, throat, and ear cup. A month later, the fetus weighs approximately 30 kilos and has hair all over its body. However, another two months of pregnancy must take place. During this period, the fetus can move its head and front legs slightly, mainly stretching. This movement can sometimes be felt or seen in the mare’s flanks. In the last two months of pregnancy, the fetus has less room in the uterus but continues to grow until it is delivered. Until that time, it lies on its back but during the delivery phase the fetus becomes tilted in the uterus after which, if all proceeds normally, it is born with its head and forelegs first.

On average, gestation ranges from 335 to 340 days, although 320 to 365 days is also considered a normal range. After the foal is born, the placenta that nourished it for the past 11 months is expelled. The umbilical cord between the foal and the membranes usually breaks when the mare stands up, but it may be removed by hand if necessary. Then the foal should stand. First-time breeders should be aware that the foal’s hooves will be covered in a soft rubbery layer, called the deciduous hoof capsule, which protects the mother’s uterus and birth canal from the sharp edges of the hooves during pregnancy and birth. This capsule quickly wears down to a level hoof as the foal takes its first steps. If all is well, the newborn foal begins to nurse from its dam within the hour. After 11 months, the moment every breeder waits for has finally arrived: the start of a new life.

If you want to know more about breeding and the KWPN, click here.