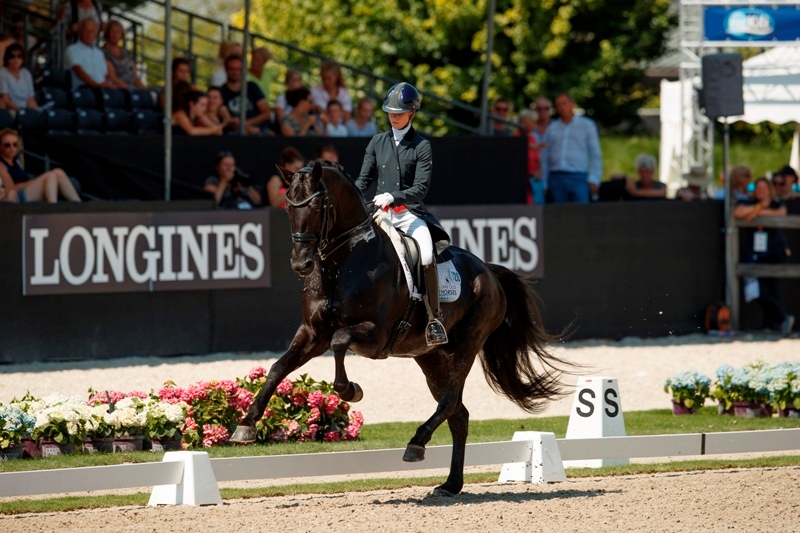 The selection for the WC Young Dressage Horses is starting to take shape. During the extra selection moment this morning, the selection committee reduced the number of horses to twelve combinations for each age class. The original last selection date of the 10th of August is now spread over two days since the FEI requires the list of nominees this week and because several riders are in Denmark for the WC of Herning at that time.

Floor Dröge explains on behalf of the selection committee: “As a committee you draw up a planning for the entire course early in the year and you make an estimate when the selection should be finished. The schedule is published shortly before the championship and it’s not until then that the date on which the long list must be filed with the FEI, is announced. In this case, the intended last selection day of August 10 takes place several days after this date. Accordingly, the selection committee has decided to organise an additional selection day and thereby split the last selection moment over two days.”

The FEI demands that all studbook hand in their nomination list this week. This so-called long list includes a maximum of twice the number of horses that may represent the concerning studbook. The KWPN may form a six-headed-delegation for each class and that means the long list may be comprised of twelve horses per age category. “We have received so many requests of combinations that are looking to qualify via wildcards, that the list of horses well-exceeded the maximum number of twelve. Today, the wildcard-participants have ridden the final test, while the other combinations showed the preliminary test. Based on these performances, we have been able to reduce the current selection to the allowed number of nominations”, says Johan Hamminga.

The remaining four-, five-, and six-year-olds are still in the race for a coveted ticket to the Longines FEI WBFSH Dressage World Breeding Championships for Young Horses that takes place in Ermelo from the 8thuntil the 11th of September. “We now have a list of nominated combinations out of which we will select the final lineup. After the 10th the announcement will follow of the actual team and then we will know who gets to represent the KWPN at the World Championships”, concludes Floor Dröge.

Buy your tickets for the Dressage World Breeding Championships for Young Horses here!