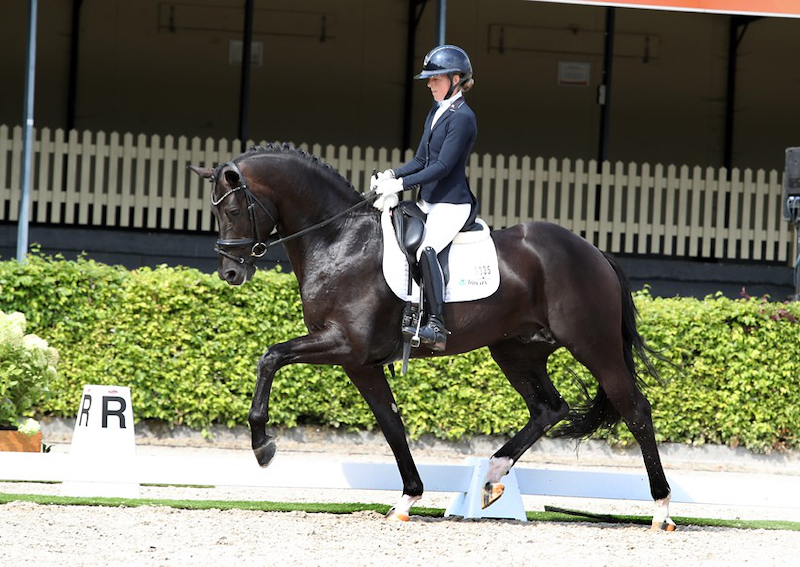 Matty Marissink and Veronique Roerink judged 61 horses today in the semi-final of the Pavo Cup for four-year-olds. Ridden by Femke de Laat it was the Secret-son Nashville SW that obtained the top score of 91.8 points. He was awarded a 9 or higher four times, including a 9.7 for trot.

Veronique Roerink enthuses: “We have seen a very broad top layer of horses with a few positive outliers. A few horses were a little too impressed by their surroundings and had difficulties to show their talents in an optimal manner. However, we’ve got some very complete dressage horses in this age category, they possess three good gaits and seemingly willing character.”

The entire top-three of this semi-final was bred out performance mares. The dam of Nashville SW (Secret uit Esina elite sport-dres IBOP-dres PROK van Jazz, fokker Stal Willig V.O.F. uit Abcoude) is active in the Big Tour. “Nashville is an impressive horse that possesses three great gaits. He displays a good mentality and shows abundant elasticity, power, and impulsion. So much power, impulsion and ability to collect and extend must be a pleasure to ride.”

Judith Ribbels steered her Nanny Mc Phee (Vitalis out of Funfun EB elite sport-dres IBOP-dres PROK by Sorento, breeder Stal Ribbels BV of Eibergen) to 89.9 points, the second position. Judith bred the mare, that was awarded a 9.5 for trot today, herself out of her Grand Prix mare. Dream Boy-son Dutch Dream (out of Hollywood Tarpania elite pref EPTM-dres sport-dres PROK D-OC by Furst Romancier, breeder A.P.G. de Lange of Swifterbant) was bred out of a Small Tour mare. Edith Chardon also piloted him to a 9.5 for trot and 89.8 total.

Come to Ermelo and visit the KWPN Centre to experience the final of the Pavo Cup yourself. Entry is free of charge. Unable to attend but curious to see the thrilling finals? Watch the livestream at KWPN.tv.