Nashville SW with 10 from Eva Möller to Pavo Cup-title 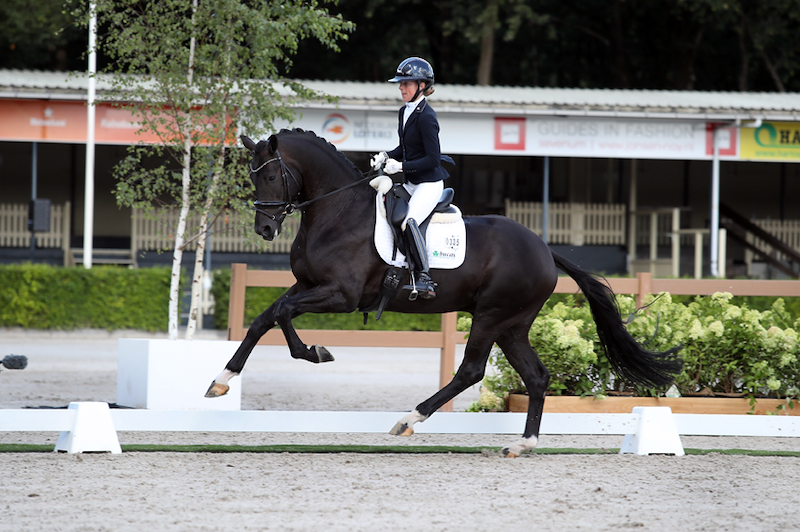 The four-year-old Nashville SW qualified for Ermelo with a top score and lived up to the expectations in the championship. The stallion won the semi-final, the first round of the final and finished it all of by receiving the ultimate 10 of guest rider Eva Möller.

Nashville SW (Secret out of Esina elite sport-dres IBOP-dres PROK by Jazz, bred by Stal Willig of Abcoude) first showed his capacities with his regular rider Femke de Laat and in the second round the guest rider Eva Möller took over the reins. She admitted she could not think of anything else to wish in this impressive stallion. “From the judges table I already deemed him the best horse, but the feeling in the saddle was perhaps even better. I give him a 10”, she enthuses. Breeder Martien Willig was handed a breeder premium by the Friends of the KWPN.

Vitalis-daughter Nanny Mc Phee (out of Funfun EB elite sport-dres IBOP-dres PROK by Sorento, bred by Stal Ribbels of Eibergen) distinghuished herself with her pleasant attitude and willingness. Eva praised the mare: “You never know what you are going to get when it’s a chestnut mare, but the feeling was great. She responds well to the aids and was really trying her best for me.” Nanny Mc Phee received a 9.5 from Eva and placed second. Breeder, owner and rider Judith Ribbels also received a breeder premium for the best mare in this class.

Dutch Dream (Dream Boy out of Hollywood Tarpania elite pref EPTM-dres sport-dres PROK D-OC by Furst Romancier, bred by A.P.G. de Lange of Swifterbant) completed the top-three. The stallion was presented by Edith Chardon. “I have given him a 9. He is a very comfortable horse to ride, but I have to take into account he was not fully relaxed in the walk.”