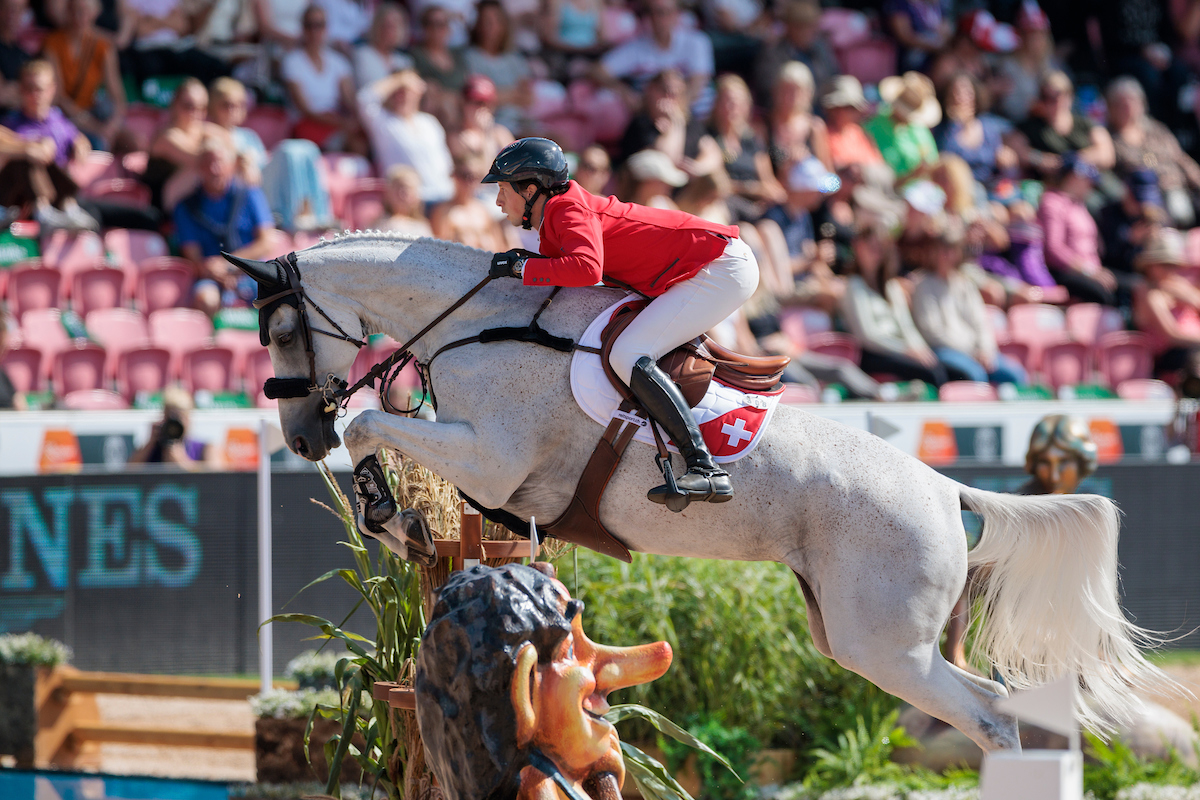 A selective yet fair speed course separated the wheat from chaff at the first day of the WC Jumping in the Danish Herning. There was not a specific decisive fence or line in this course, the challenges were everywhere. Perhaps horses with a big canter were at an advantage in the big ring of the Stutteri Ask Stadion. The two Baltic VDL-offspring Leone Jei and Faltic HB lead the intermediate ranking together with Figor by the Canadian Tiffany Foster.

The horse that possible has the biggest canter in this field of competitors is the incredible 10-year-old Leone Jei (Baltic VDL out of Dara ster prest IBOP-spr PROK by Corland, bred by Gijs van Mersbergen of Udenhout) of Martin Fuchs, who definitely has set his sight for a top ranking. The silver medalist of the EC Jumping of last summer jumped crystal clear and with the scope he is renowned for. After the first leg, they are seated in third rank.

Despite that this horse repeatedly impresses, it was not until last week that he delivered the first clear Grand Prix of this year with the Swiss top rider. That one rail bothered Fuchs and that’s why he decided to adjust his tactics and enter and win the 5* Grand Prix of Dinard right before the World Chapionship. “Leone Jei gave me a great feeling today. The plan we had, really came together. I could leave out a stride everywhere without taking too much risk, he has a huge canter. That gives us confidence for the rest of the week.” When asked what Martin Fuchs likes best about his horse, he doesn’t hesitate: “His character, his attitude. He is so cool, in the stable, when you ride him at home, he is always motivated and has lots of blood. He is very eager to work. Sometimes he is a little too motivated, that’s why I have took him with me a lot the last few weeks. He was a tad too keen, and I could not ride him well enough. At first, I thought I had to save him somewhat for a big course, but that is not necessary because of his blood. Four days of jumping forms no problem for him.”

Ben Maher set foot in the arena of this international championship aboard another horse, but the result is the same: a clear ride. He did not saddle his Olympic champion Explosion W, it was up to Faltic HB (out of Beloma B elite IBOP-spr sport-spr D-OC, bred by H.A. Brinkman of Dalfsen and M. Huisman of Nieuwleusen) to take the honours. When you compare the two side by side, the differences are significant. Faltic HB is not too big, while Leone Jei is. However, both are ridden by a top rider and possess a functional canter, according to both gentlemen. They also both jumped clear at the World Championship. “He was not so fast at first. I have taken over the reins since November and at the beginning we always incurred time penalties. Thus, we trained that aspect. If it looks fast, we run into problems. So, the sweet spot is to be fast, without looking it.” Today they succeeded in that because Maher performed an effortless quick clear.

The big question is naturally why Explosion W is not present in Herning. “I do not know if it has been the right decision. It is very difficult to leave such a good horse at home. The decision was made by the team, at the very last moment. I do have the confidence and faith in Faltic that he can replace Explosion. He is in very good shape this year. It’s his first championship, so an entirely new experience. And to make that debut at a world championship is quite a challenge. But he is so brave, and we had a great rhythm today.” Faltic HB and Ben Maher currently hold in the third position.

Out of the 103 showjumpers at the WC, 10 are KWPN-registered and also the KWPN-recognized Vancouver de Lanlore made his appearance. Three KWPN-horses in the top-10 is a solid start for the Dutch bred horses. In addition to the two Baltic VDL-sons, we also find Figor (Querly-Elvis out of Voberlina prest by Indoctro, bred by H.W. van Lindenberg of Eefde) of the Canadian Tiffany Foster on top of the intermediate rankings. It’s the first international championship for this 12-year-old gelding that has been campaigned by Foster since 2017. Their very fast round secured the duo a preliminary sixth position. In rank twelve we see the 15-year-old Conquestador (Nabab de Reve out of Melissa stb prest by Farmer, bred by J. Pennings of Berlicum) of Italy’s Antionia Maria Garofalo, they also performed a quick round. Finn Lente (out of Cherlynn Lente by Colandro, breeder Nijensteen) also made the top-20. This 12-year-old gelding by Gaillard de la Pomme remained clear with Argentina’s José María Larocca jr.

The first round of the Team’s competition starts tomorrow at 13.00hrs.

The entire program, an overview of the participating KWPN-horses and more can be found in the mediaguide. The WC can be followed at FEI.tv and CMH.tv. The KWPN website and social media channels also keeps you updated on all the KWPN-horses in Herning.