Glamourdale and Hermès, the KWPN stars of the WC dressage 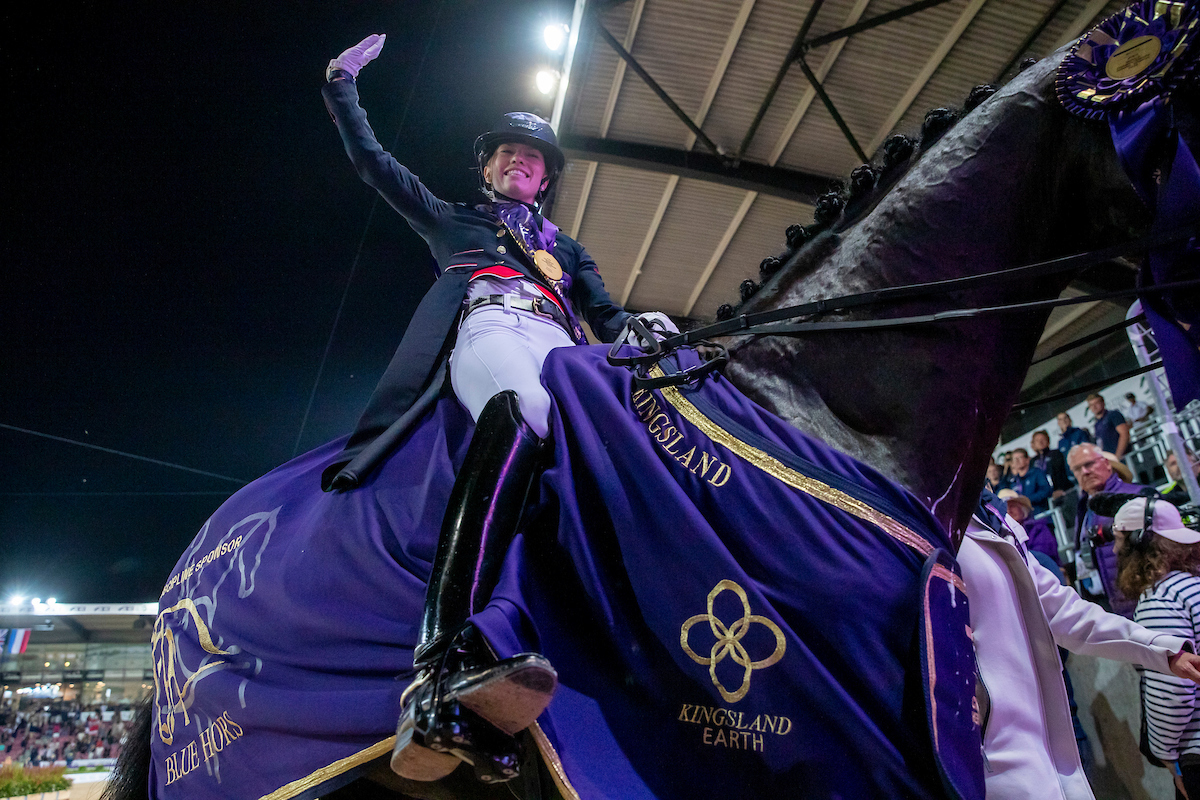 A packed stadium, an exhilarated audience, and the best dressage horses in the world. A must-see for every dressage enthusiast. After the silver team medal of the British KWPN-team, the golden medal of Glamourdale and bronze of Hermès in the Grand Prix Special, these two dressage stars again danced to the podium tonight.

Breathtaking! That’s the perhaps the best fitting description of the freestyle to music of Glamourdale (Lord Leatherdale out of Thuja pref by Negro, bred by J.W. Rodenburg of Oudekerk aan den IJssel) and Charlotte Fry. Well before the duo commenced their last line, the spectators were clapping along. And Glamourdale? He gave it his all. A PB of 90.654% crushed all competition and the KWPN-approved stallion once again secured the gold. The silver went to Cathrin Dufour and her Vitalis-offspring Vamos Amigos, cheered on by their home crowd they also obtained a PB: 89.411%. Dina van Liere steered the KWPN-approved Hermès (Easy Game out of Bukkie keur pref prest EPTM-dres by Flemmingh, bred by G. Gijsbers of Loosbroek) to another bronze medal. Again, thanks to a PB: 86.900%!

Van Liere, already named ‘the new Anky’, shares nothing but praise about her top horse Hermès. “Hermès is getting better every day in this championship. Riding him through the test was very easy. He became more and more resigned and relaxed. I could ride the test the way I wanted, right up till the end. I am extremely proud of Hermès. It is incredible and I am so happy”, she concludes the championship that yielded her two individual medals. 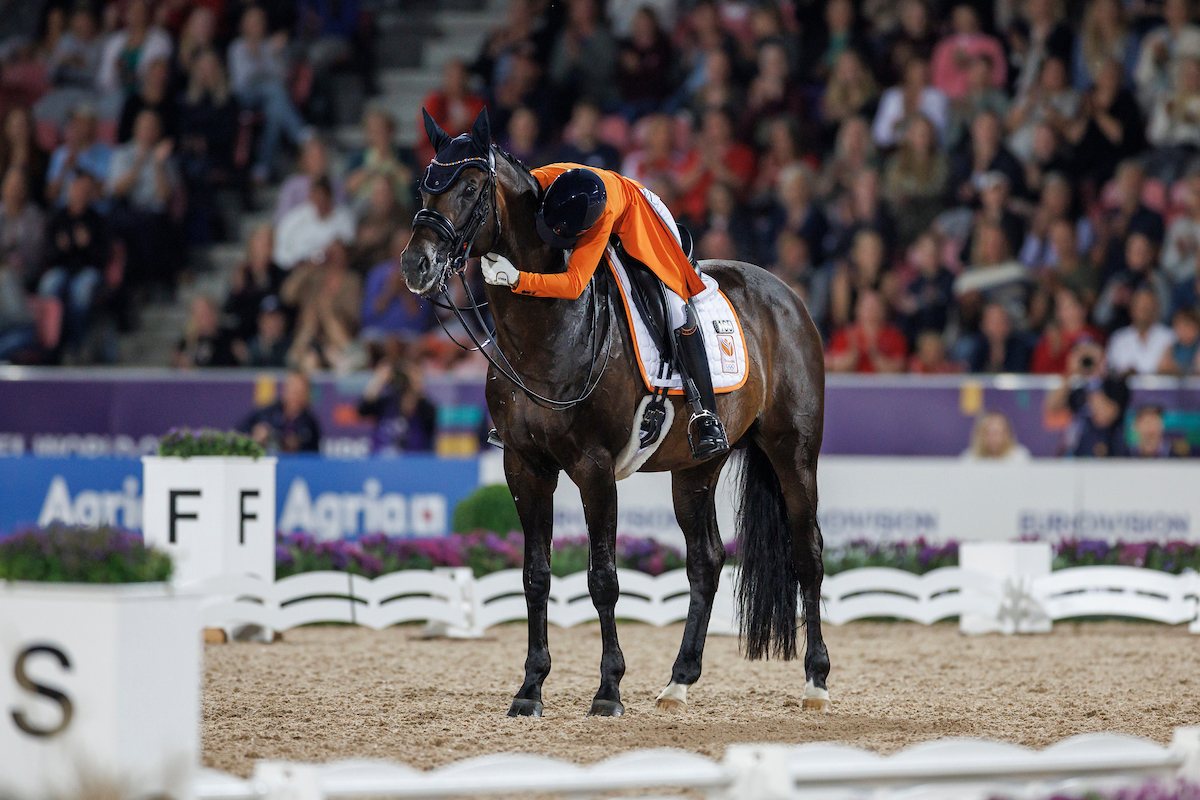 The third KWPN-stallion tonight was Indian Rock (Apache out of Crisjena keur pref IBOP-dres by Vivaldi, bred by J. de Bruin of Schelluinen). Ridden by Emmelie Scholten this stallion left quite the impression. So much quality, so much talent for the most difficult exercises. Tonight, they faced some tension; while entering the arena, the crowd was still buzzing, and the nine-year-old Indian Rock had some difficulties to cope with that. The resulting score was 74.589%. However, a grand future in dressage is clearly on the horizon. 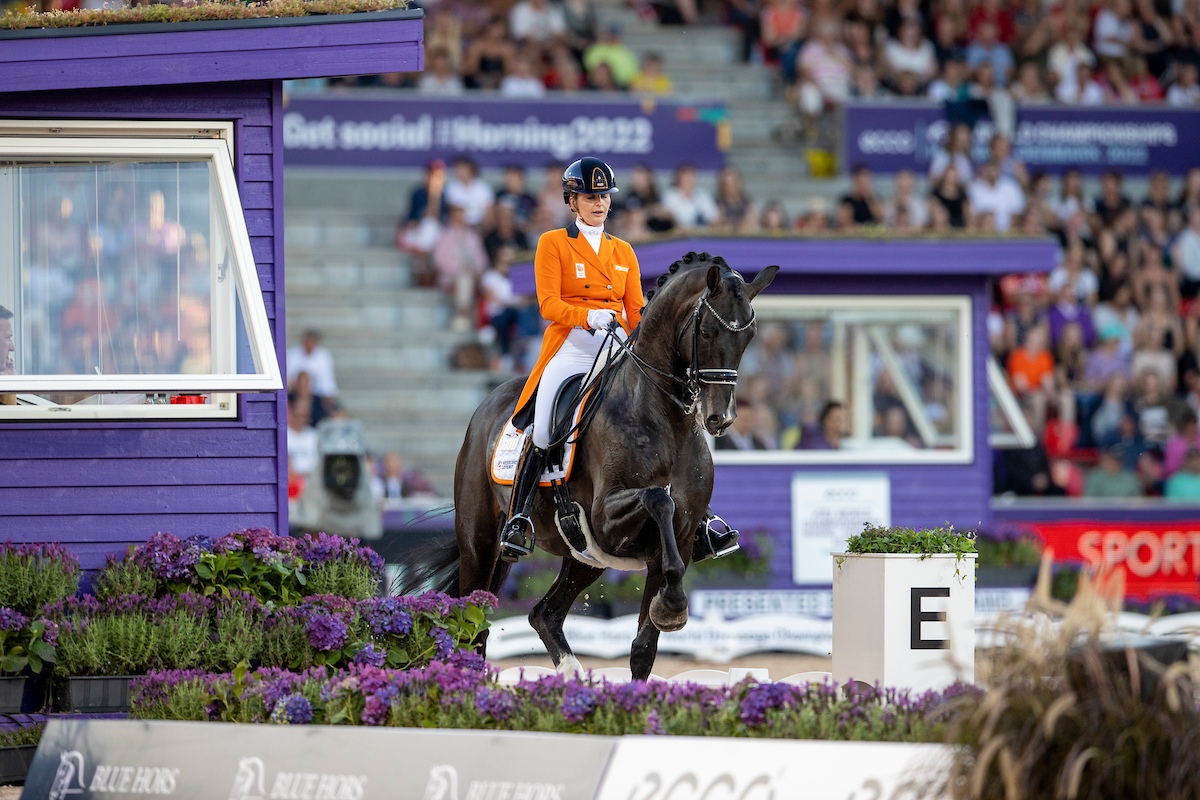 The 16-year-old Classic Briolinca (Trento B out of Trolinca stb prest by Royal Dance, bred by Gebr. Van der Steen of Den Dungen) performed the freestyle of a lifetime. Seizing a PB of 84.043%, her British rider Gareth Hughes is not at all ready to think about stopping. “Riding here, in front of such a fantastic crowd, in such a big arena and with this horse, that is truly a dream come true. And I think she could even do better.” They placed fifth. Charlotte Dujardin scored 83.132% with Imhotep.

The entire program, an overview of the participating KWPN-horses and more can be found in the mediaguide. The WC can be followed at FEI.tv and CMH.tv. The KWPN website and social media channels also keeps you updated on all the KWPN-horses in Herning.