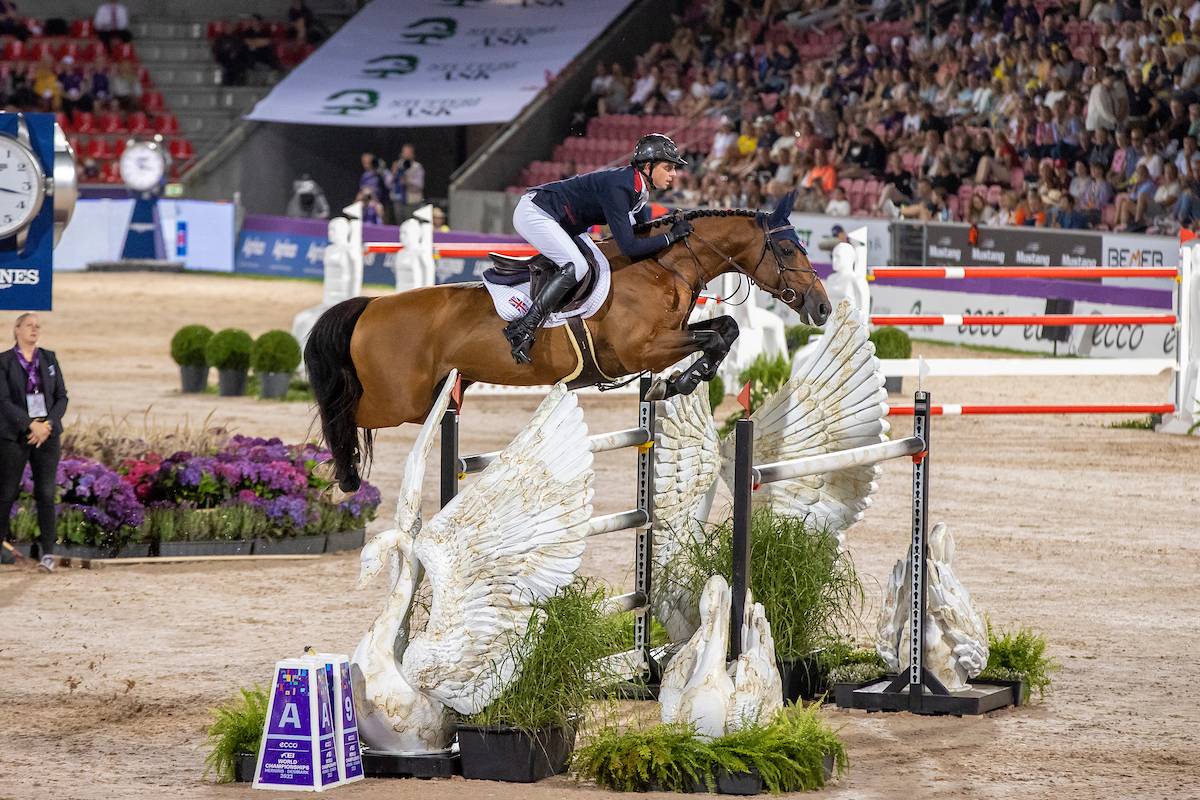 The World Championship of Herning offered the audience sport of the highest level and the jumping team competition and individual final were an absolute rollercoaster of emotions. The fully booked Stutteri Ask Stadion was packed with an enthusiastic crowd and the riders provided thrills and spills right up to the end. Faltic HB (s.Baltic) secured teambronze and an individual fourth position.

Sweden proved to be in a league of their own, following their impressive achievement in Tokyo, they secured teamgold and Henrik von Eckerman aboard his King Edward proved invincible as they cleared every single course and deservedly took home the gold. Great-Britain secured a bronze medal and a historical one at that as it was 24 years ago the British team made the podium at a world championship. Ben Maher and the 12-year-old Faltic HB (out of Beloma B elite IBOP-spr sport-spr D-OC, bred by H.A. Brinkman of Dalfsen and M. Huisman of Nieuwleusen) delivered the crucial clear rounds for their country. In the individual final they came incredibly close to a podium finish as well but had to settle for a respectable fourth position. Ben Maher had to leave his extraordinary Explosion W at home and was more than pleased how Faltic HB stepped up in Denmark: “He was incredible and jumped fantastic. Faltic really delivered some great work this week and truly proved to be champion horse.”

The individual final was primarily influenced by the stallions Baltic VDL, Toulon and Nabab de Reve. Martin Fuchs had the medals in sight but incurred a few rails on Sunday with his mighty Leone Jei (Baltic VDL out of Dara ster prest IBOP-spr PROK by Corland, bred by Gijs va Mersbergen of Udenhout). The 2021 EC silver medalist eventually placed 11th. One position below was the Querly Elvis-son Figor (out of Voberlina prest by Indoctro, bred by H.W. van Lindenberg of Eefde) of Canada’s Tiffany Foster. He jumped an exquisite first round but noted two rails and a time penalty in the second leg. “My horse was flying today, he felt amazing. I did not ride the second course completely to plan and that’s why we had two rails off. But I am incredibly proud of Figor”, responds Foster after her first international championship with Foster. Toulon-offspring F One USA (out of Beat Me ster sport-spr by Tangelo vd Zuuthoeve) jumped another clear round again today, but just missed out on qualifying for the last 12. The by Roelof Bril bred great-grandson of Grand Prix mare Burggravin placed 13th with Italy’s Lorenzo di Luca. He was followed by another Toulon-offspring, the KWPN-recognized stallion Vancouver de Lanlore (out of Hispania de Bacon by Le Tot de Semilly, bred by Anne Dafflon) that also cleared the first course of course designer Louis Konickx. Conquestador (Nabab de Reve out of Melissa stb prest by Farmer, bred by J. Pennings of Berlicum) incurred two poles, he eventually placed 21st in the World Championship.

An overview of all the KWPN-horses that participated in Herning can be found in the mediaguide.