WC Herning: medals in every colour for KWPN-horses in Para Dressage 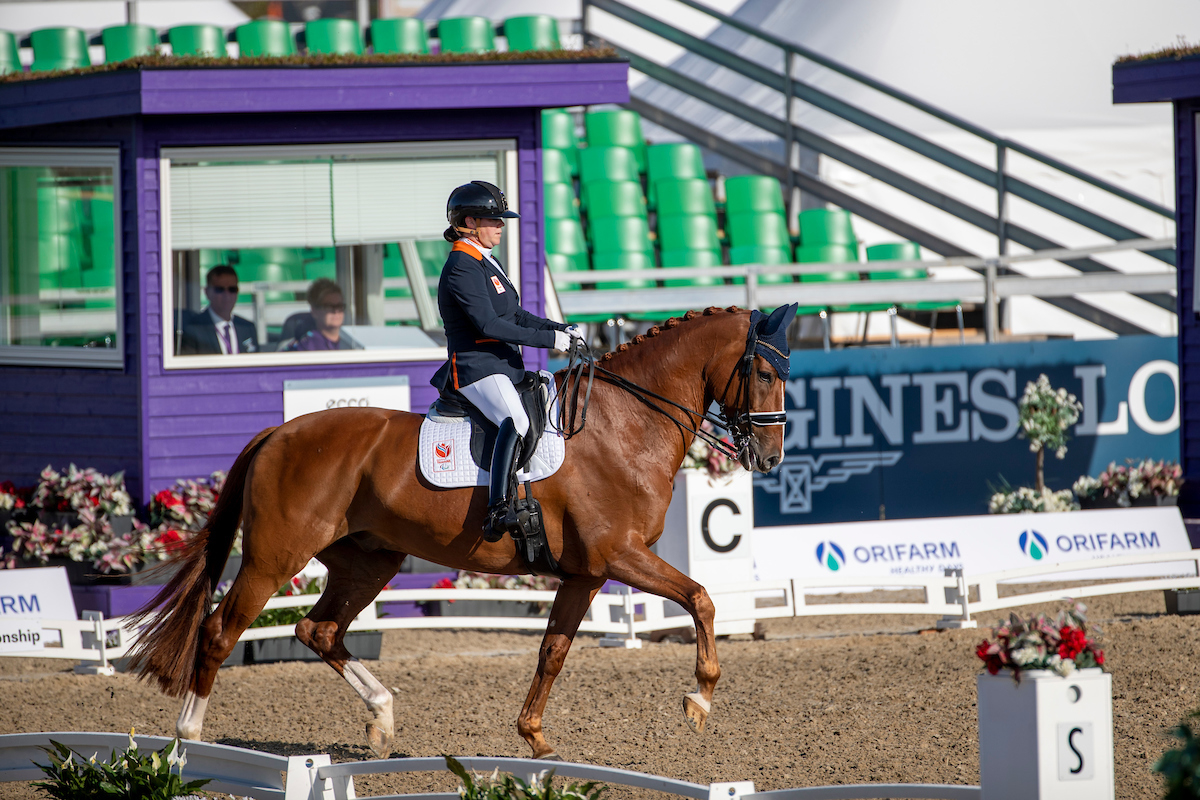 The Para Dressage riders offered some awe-inspiring action at the World Championships in Herning. Many KWPN-horses competed in the five Grades and that led to multiple medals.

The orange team that represented the Netherlands grabbed team gold. Leading lady Sanne Voets and Demantur RS2 (Vivaldi uit Kaylee keur prest sport-dres van Elcaro, fokker A.M. Reuzenaar uit Schaijk) even secured the triple: teamgold, individual gold at day one and individual gold in the freestyle to music. In the latter the combination even scored 82.485%. Sanne Voets said about the freestyle: “There are only a few moments in your career that you enter the ring, lift your hand, and then soar to another dimension, closed off from the outside world. Just you, your horse and the music. Today was such a day.”

EHL Daula
Demi Haerkens made her debut at an international championship and after winning silver in the first test, she made a crucial contribution to team gold with EHL Daula (Gribaldi uit Kladaula keur pref prest van Michelangelo, fokkers J.M. van Uytert uit Heerewaarden en A. Barnveld uit Zeist). In the freestyle the pair just missed out on a podium.

Alphaville N.O.P. back on track
Frank Hosmar picked up bronze in the first individual test with his Alphaville N.O.P. (Sandreo uit Marcia keur van Iglesias, fokker A. Hendriks uit Reek) and must have felt a lot of pressure as the last rider for TeamNL, while Denmark had secured a top total already. The two closed the deal and performed an excellent score that resulted in teamgold. On Sunday Hosmar completed his set of medals in Herning by taking the silver in the freestyle to music. It was the fourth world championship for Frank Hosmar, and it was a special one since Alphaville was very sick last year and returning at this level seemed not realistic. However, they seemed to have come back even stronger. ​

For Ireland, Michael Murphy secured two individual bronze medals aboard the fifteen-year-old Cleverboy (Vivaldi uit Wanny elite EPTM-dres PROK van Kennedy) in Grade I. A remarkable detail is that this horse is bred by Ad Gijsbers and Elcke Govers, they also bred double bronze winner Hermès of Dinja van Liere out of this lineage. And that means four medals in one week for one KWPN-breeder!

An overview of all the KWPN-horses that participated in Herning can be found in the mediaguide.