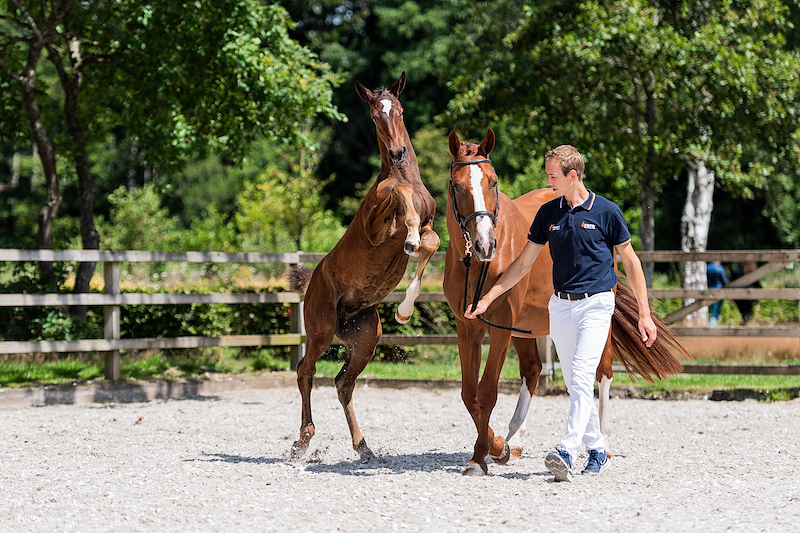 A very select group of 15 promising jumping foals forms the collection of the KWPN ExclusiveJumping Foal Auctions. From the 29th of August to the 1st of September it is possible to bid on these future talents, each of which is closely related to international showjumpers. The best European bloodlines are included and the collection is now online.

Proven damlines from home and abroad are combined with top progenitors and upcoming talents. As a result, just like last year, a lot of international interest is expected for this special edition of the KWPN Online Auctions, which is open for bids around the days of the Dutch championships/Blom Cup in Valkenswaard. The lots close on Thursday the 1st September from 8PM.

Top genes
The best European bloodlines are represented in this collection. For example, the Eldorado van de Zeshoek son Sundorado TN is a half-brother of several international showjumpers, including the 1.60m level competing Esteban (s.Clinton) ridden by Heiner Ortmann. The dam of the filly Solinn (s.Tangelo van de Zuuthoeve) is a half-sister of the 1.60m horses Dolinn (s.Cardento), Terrific (s.Marlon) and Webster (s.Hors la Loi II). The colt Simon (s.New Pleasure VDL) is a grandson of the internationally 1.55/1.60m level competing mare Exquise du Pachis and the interesting filly Sattebelle (s.Mans) comes from the direct damline of the KWPN approved Grand Prix stallion Cristello (s.Numero Uno) ridden by Denis Lynch. In the pedigree of Starlet van de Reeberg, we find the Grand Prix winner Codex One coupled to the well-producing 1.40m mare Vaantje R, who foaled the 1.55m showjumper A.Vaantje R (s.Carinjo) and is granddam of the 1.50/1.60m horses Ideaal (s.Andiamo) and Indence HJ (s.Falaise de Muze). The Mister Hornet DDH filly Siske is a half-sister of the international 1.50/1.60m level showjumper Europe (s.Cantos) ridden by Andrej Pavlovic and the Verdi filly Sianca was bred out of a half-sister of the Olympic showjumper Liberty (s.Libero H) of Laura Kraut and the Grand Prix showjumper Molca's Candlelight (s.Katell xx). And what to think of Shogun Noordenhoek (s.I'm Special de Muze), whose dam is a half-sister of the 1.60m horses Copa Cobana (s.Cartano) and Evita (s.Tangelo van de Zuuthoeve). Another well-bred future talent is the Pegase van ’t Ruytershof foal Syrië, which was bred out of a half-sister of the Grand Prix horse Bellinda (s.Namelus R) ridden by Kara Chad.

More information
The collection can now be found at at www.kwpn.auction. From Monday the 29th of August it is possible to bid online on the foals from this collection. To be able to place a bid, it is necessary to register as a bidder on the website first and the lots will close on Thursday the 1st of September, from 8PM. A KWPN inspector is available to assist you with more information about the foals. In addition, our sponsor Horses2Fly can support with international transport. For questions, please contact Mairin van der Tol via salespromotion@kwpn.nl and +31-341-255511